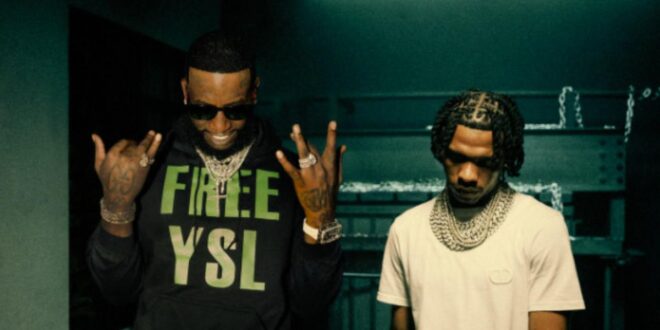 Gucci Mane and Lil Baby show support for YSL on their new collaboration, “All Dz Chainz.”

Gucci Mane and Lil Baby are back at it again with the release of their latest collaboration, “All Dz Chainz.” The Wheezy-produced banger is a celebratory moment that acknowledges the hard work they’ve put in. However, it’s an anthem that speaks volumes about the current state of affairs in Atlanta. The two rappers detail the frequent dilemmas that come with fame, as we’ve seen in the case of YSL. Baby details the envy that comes with being in his position through auto-tuned sing-raps.

Gucci directly addresses the YSL RICO case on the record as he shows his support for Young Thug and Gunna, as well as his own artists, Foogiano and Pooh Shiesty. In the same breath, he also shows his love to Trouble, who passed away earlier this month. While Gucci does reflect on the jealousy that poses a risk to his safety, he also issues caution to rappers who are being targeted by law enforcement. “The D.A. bring up lyrics and the court may not be even true/ They try to pen some shit next to your name that you ain’t even do,” Gucci raps on his verse.

The latest offering from Gucci Mane comes just after he released the deluxe edition of 1017’s So Icy Gang: The Reup earlier this month.

Check out the latest from Gucci below.

Notable Lyrics
Fuck the trolls, the blogs, the hoes and yes-men who be instigating
Hit him in the head and he still survive but still a mental patient
I don’t even have to drop no payments, they feel obligated
Shit’s so complicated, now the killers be cooperatin’
Feds investigatin’, but I made it, never gave a statement
AKA Big Gucci or Big Guwop, never call me Radric