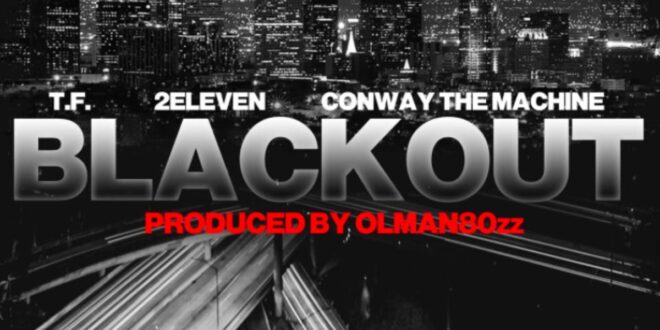 T.F. & 2Eleven Lock In With Conway The Machine On “Blackout”

T.F. and 2Eleven enlist Conway The Machine for “Blackout.”

T.F. and 2Eleven are getting hella active this year. The two rappers are a little over a month removed from the release of their second collaborative project together, Skanless Levelz 2. The follow-up to their 2020 joint effort consisted of eight songs in total with appearances from G Perico and Slumlord Trill. However, the two clearly have more heat in the stash.

On Friday, they came through with a new single titled, “Blackout” ft. Conway The Machine. The two West Coast MCs dive into the gritty Buffalo sound with some help from Olman80zz, who cooks up the eerie production. T.F. and 2Eleven flex their lyrical prowess even harder on this one before Conway closes out the record on the final verse.

Check out T.F. and 2Eleven’s new single below.

Quotable Lyrics
If it’s pressure, we spin and we ain’t gon’ let it drag out
Told that bitch to put up that plate and don’t leave them bags out
Where I’m from, you can’t put up your peace, it’s getting bad out
But I’m a straight goon, doing push-ups and holding us in a dayrun
Your turn to eat comin’, but it ain’t soon

Previous A Review Of Anton Commissaris Good Feeling Song ‘Life Is For Livin’
Next DaniLeigh Is Heartbreakingly Honest About DaBaby Drama On New Single, “Dead To Me”