Nicki Minaj Teases Visual To “We Go Up,” Celebrates “Beam Me Up Scotty” Anniversary

The “We Go Up” visual’s arrival is right around the corner and after sharing a teaser video, fans are ready.

The buzz surrounding this collaboration between Nicki Minaj and Fivio Foreign hasn’t ceased since “We Go Up” arrived. Fivio recently released his major-label debut B.I.B.L.E., and although a few of his peers thought it was appropriate to poke fun at his first-week sales, the Drill rapper has been praised for the effort by fans. Fivio has been an artist who has successfully climbed out of the often cluttered Rap scene and found himself sharing stages with Kanye West. It’s a new era of his career and Nicki Minaj has been supportive. 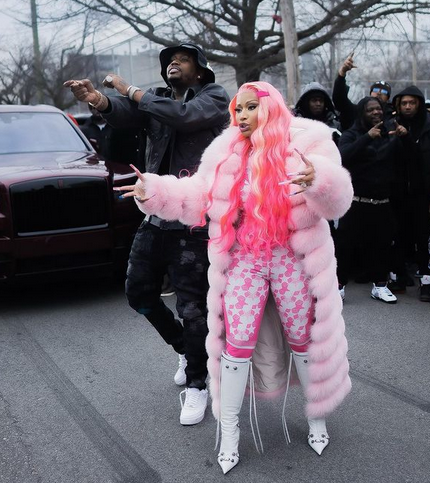 Earlier yesterday (April 18), the Rap legend teased the visual and asked fans if they should drop the visual.

The answer was a resounding yes from not only the public but from Minaj and Fivio’s fellow artists as well. This wasn’t the only cause for the hype from Minaj’s front; she is also celebrating the anniversary of Beam Me Up Scotty, her mixtape that was first released 13 years ago. A post that Minaj reshared to her platform states: “After it’s re-issue in 2020 it became the highest ever charting re-released hip hop project ever and the highest charting female mixtape of all time, debuting at #2 with over 80k sold! [crown emoji].”

Minaj added, “God, thank you for it all [pink bow emoji],” she said. “Love my babies so much.” Check out the posts below.

Previous BIA And J. Cole With A New Track And Video ‘London’
Next Roderick “Pooh” Clark Of R&B Group, Hi-Five, Dead At 49