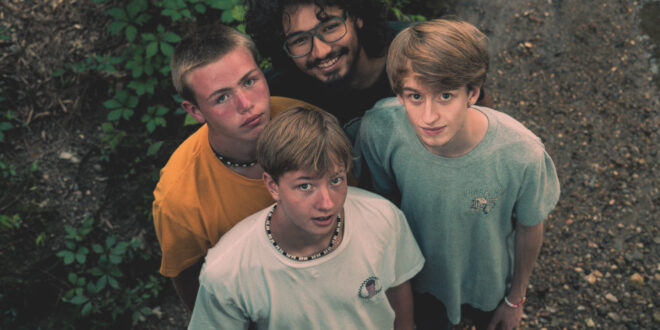 Juniper Avenue is a Raleigh-based band comprised of drummer Jeremy Adinolfi, guitarist and vocalist Luke Baker, bassist Cody Everest, and lead guitarist Graham Levy. Juniper Avenue was created as a band in high school in Raleigh, North Carolina, when they met through their dedication and enthusiasm to produce and play music, utilizing sources such as Jazz Band through the school, and they have been together for four years. “Bumfuzzle,” the band’s latest song, was released on July 25th this year as a single off their upcoming album “Chuck Rock.”

“Our influences vary through all music, some we like more than some, some we like equally in different emotional corners. Cody’s playing style is mostly inspired by funk and punk, Jeremy is influenced by Jazz and Progressive Metal, and Graham and Luke are widely influenced primarily by indie music, but for all of us, the influences are infinite.”

“Bumfuzzle” is a lovely tune that will undoubtedly make the listener happy and it is an ideal jam for refreshing energy. The song’s beat brings happiness to the listener’s heart and has us moving our feet. The composition is catchy and will stick in our thoughts. “Bumfuzzle” is a classic delight that will captivate the listener’s emotions. The vocals are very clear and executed well, while the performer keeps the lyrics lively.

According to the band, “Bumfuzzle” is loosely influenced by current events and is not meant to make sense. Because it’s a fever dream, the lyrics are supposed to convey a condition of unstable equilibrium, with spontaneous and erratic thoughts following one another. The music is their take on the early Beatles or maybe the Sex Pistols.

This tune is mesmerizing in a way and will undoubtedly garner a large number of streams. It’s jam-packed with profound feelings, with thundering rhythms blending with strong guitars and interwoven piano and it has a robust structural foundation as Graham Levy recorded and produced the song.

Listen to “Bumfuzzle” by Juniper Avenue on Spotify and let us know what you think. Cheers!

Notable Lyrics
Spiders climbing up and down my legs
Don’t understand a word my demon TV said
Does anyone really care?
It’s a collage in camouflage
It’s something that I don’t understand oh oh well
I think it’s just a game