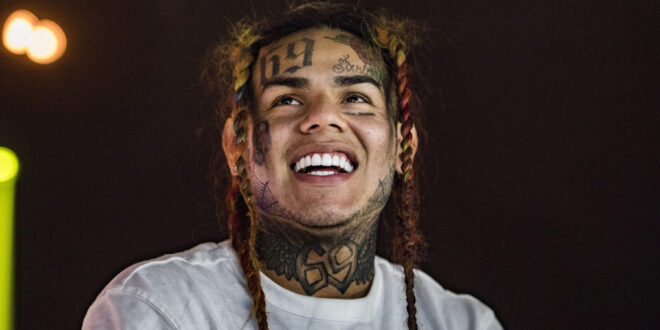 6ix9ine recently ruffled feathers when he compared the circumstances that led to him being kidnapped and assaulted prior to his incarceration to the deaths of rappers Pop Smoke, Nipsey Hussle, and King Von during an appearance on an episode of DJ Akademiks’ Off the Record podcast.

The polarizing rapper, who was released from prison in 2020 after serving a light sentence due to his cooperation against his codefendants, argued that being “caught lacking,” which means not having a firearm in your possession, can happen to anyone, using late rapper Nipsey Hussle as an example. “Everybody gonna say they shoulda, woulda, coulda,” began 6i9ine, adding. “My respect to the West Coast…You never lacking, right? So what happened to the n***as that lacked? Let’s bring up Nipsey Hussle. You think he said, ‘Yo, n***as will never come up to me.’…Yo bro, it happened to the best of them.”

While it was unclear what point the 25-year-old rapper was attempting to prove during the heated conversation, he later gave insight into his motive by comparing the backlash he’s received for his cooperation with law enforcement and the reverence shown to the aforementioned artists by their peers and fans in a post on his Instagram account.

“My point is for the people who don’t understand ‘I was lacking when sh*t happens to me’ it happens to the best of us TO THE BEST,” he wrote in his defense. “So why single me out?? when your favorite rapper gets caught lacking and doesn’t survive the situation they are never spoken down on .. I guess it’s just that it’s cool to hate on 69 now.. witch is cool idc but understand my point it’s not a math problem. It’s simple common sense.”

Watch 6ix9ine’s interview on the Off the Record podcast below.