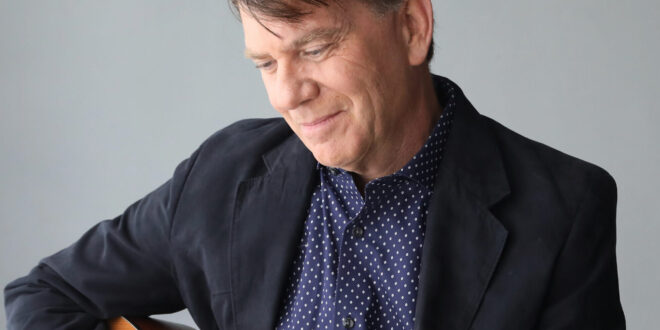 Chris St. John, a New York-based musician, creates impressive music with an entirely different approach and sense of style. He is well known for his delicate acoustic tracks that explore the concept of love, and he puts his emotions into finely crafted songs for his listeners. On September 23rd, he published “When Dreams End,” an eight-track album that began as a single, then became an EP and is now an album. On this album, he produces a lovely mix of styles.

“Lost Without Your Love,” the album’s first hit, begins with acoustic guitars and luscious textures. It’s a song about the futility of infatuation, and Chris’ passionate vocals perfectly complement the lyrics. It flows so smoothly, and the calming acoustic notes, along with delicate yet detailed instrumentation, give helpful depth to the song. “Oh Papa,” the second single, is likewise an acoustic track that picks the pace up. As Chris speaks on how tragic it is to lose a father, the song has some beautiful string melodies that make it more agreeable to the ear. This song is captivating, and the cadence causes him to grasp the song’s visceral atmosphere.

“No More One Mores,” the album’s third single, is yet another exquisite composition of a dreamy tune with its enchantment. The lyrics are about love, and the backing for Chris’ voice isn’t what you’d anticipate, yet they work well with each other. The music is incredibly lovely, and the vocal peers truly bring the lyrics to life. The fourth tune, “What’s Wrong With Me,” is a bit peppier. Although the songs are basic, his vocal delivery pushes you never to give up and never stop trying as Chris focuses on his lost aspirations and the lack of misconceptions about his failure in this song.

The fifth track is the title track, “When Dreams End,” and the bouncy acoustic texture of the chords is quite appealing and lends a lot to the overarching mood of the song. It’s a song about Chris’ restoration to divinity, but there’s a lot more to it when you listen to it. Chris’ vocal delivery is fantastic, and his flow sets the tone for the song. “When Dreams End” is the album’s longest tune. “Her Name Was Lily,” the sixth tune, has me completely fascinated. It’s a song I liked at first because it attracted me to its pleasingly attractive emotional background. Chris wrote this song on his mission visits to El Salvador and the beauty he discovered in the people and the land. The song has a fantastic intensity with the chorus spoken in Spanish and the hooks in English, and such good content will have a larger effect. I have no hesitation that this song will be much enjoyed by the audience.

“These Curves” is the album’s final song, except one. It has amazing sounds that lend a lovely gloss to the song and a fluid flow that makes his voice perform brilliantly. This is an emotive song in which Chris tells his listeners about an honest contact he had with someone he may have adored. Finally, “Bitter Tears” brings the album to a close on a somber note. This song blooms with a peaceful melody that you can breathe as Chris exploits real emotions and realistic words to lure the listener into his musical journey. It’s a song about an unrequited love that gives life direction and his voice perfectly communicates the meaning.

Overall, “When Dreams End” delves into the many emotional webs that comprise love, relationships, and dating, as inspired by Chris’ personal experiences. It’s a one-of-a-kind and varied record that showcases Chris’ ever-expanding abilities as a songwriter, guitarist, and vocalist. I admire the album’s vitality, which is so strong at its heart. The songs become quite enjoyable and sweep us into their acoustic realm. Chris’ performances mesh so perfectly and so clearly.

Listen to the “When Dreams End” album by Chris St. John on Spotify and let us know your thoughts. Cheers!