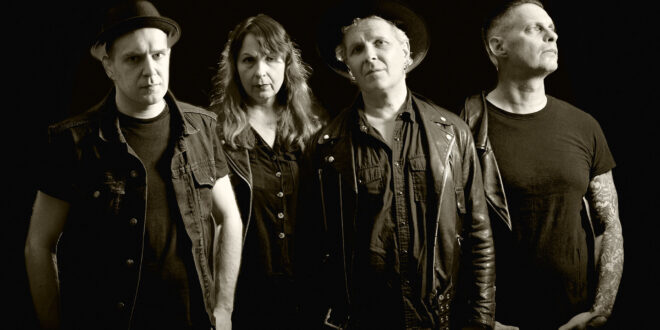 Daggerplay is a Finnish rock’n’roll band founded in 2011 in Helsinki. Their sound is a blend of raw punk, rock’n’roll from the 1950s and 1960s, and retro pop. Pekko Mantzin, vocalist and guitarist, Tommi Luostarinen, bassist and backing vocalist Ville Ahonen, and drummer Sirpa Immonen make up Daggerplay.

With lyrics based on their own experiences growing up in a tiny village in Finland and the chaotic years living in London, but not losing the optimism and comedy of it all. The band is back with their smoking alternative ballad “Insomnia,” which was released on May 20th of this year and is their sixth single after their critically acclaimed second studio album, “Subterranean Reality”

It’s all about the music for Daggerplay. Delivering melodic hooks and skillful arrangements that accompany each song with the perfect touch and attitude. There is little question that Daggerplay is not scared to experiment with various rock music genres such as blues and folk.

“Insomnia” is a thrilling play. The guitar riffs and the strength they lend to the song will be the decisive factor in attracting people to listen to it. There is also a stimulating part of the lyrics that will catch the listeners’ interest, as well as the song’s engaging instrumentation. The song has some eccentricity to it, which makes it more interesting for people to comprehend, and it has a smooth flow.

Regarding their clever genre fusion on the song, they brilliantly melt into one another, with no hints or disturbances. The guitar rendition and quality produced are excellent, and this is the key component of the composition that will be remembered by listeners. The musicianship is very vital in keeping a certain atmosphere. I like the song’s vitality, which grows even more engaging and delightful throughout the guitar.

The distinctive chorus riff of the song, with the guitars and drums acting in sync, is unique in that it creates a hook that is dependent on both instruments. The songwriting for the single employs melodic aspects while still capturing the rhythm.

Listen to “Insomnia” by Daggerplay on Spotify and watch the video with the above link and let us know what you think. Cheers!

Going nowhere running around and round
Now days are nights and nights are sleepless days
Out of his brain night’n’day
Speeding up on a hellbound train
Blown away, wide awake, locked up