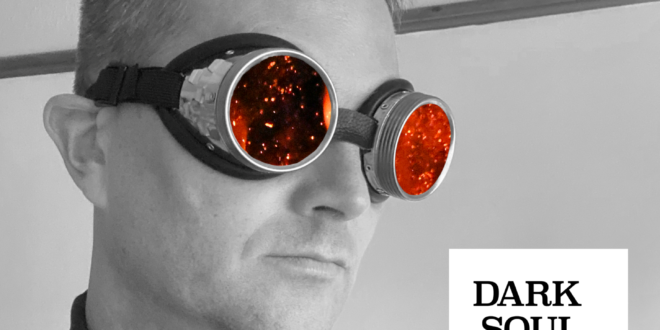 Dark Soul Safari Is “Running with Scissors” In His New Ep

Dark Soul Safari, located at the cool end of avant-garde rock, examines themes of individuals and mankind itself on the verge of disintegration. Adriaan van Heerden’s avant-garde rock outfit Dark Soul Safari is situated in London but grew up in South Africa, where he learned to play multiple instruments and began writing music from a young age, and “Running With Scissors” is his first Ep which he debuted on the 20th of July, this year. The EP is made up of four singles and lasts 20 minutes and 4 seconds.

In terms of the Ep and its components, it begins with the lead single “That’s How I Roll.” The evident lively drum beat and a good rhythm guitar give this tune an initial rocky atmosphere with a silky bassline. The lyrics relate to the narrative of a road rage incident and delve into the protagonist’s mentality.

Moving on is the title track “Running with Scissors,” which serves as the EP’s second single. The instrumentation on this song is softer at first, and the singer’s vocals arrive with a wonderful melody until the tune concludes with a sprinting beat. Based on the song’s topic, it is a haunting lament for humanity’s (future) collapse as a result of climate change and political incompetence, which eventually transforms into a type of euphoria.

“Jim the Priest” is the EP’s third tune. This song portrays the narrative of a phony evangelical preacher who takes advantage of his followers in exchange for money and special privileges. This song has a lovely melody accompanying the phrase “oh happy day, oh happy day.”

The closing tune, “Still Chasing Windmills,” is inspired by Miguel de Cervantes’ classic novel “Don Quixote.” An elderly guy thinks about his past misfortunes but refuses to give up hope. With a shift on the EP, this song converts us into a tale of literary adventure.

“Running with Scissors” is an EP that has it all: the old vintage style of songwriting with a tinge of modernity that demonstrates Dark Soul Safari’s talent. The tracks’ production is fantastic and simple, and Dark Soul Safari has created a compelling EP.

Listen to the full Ep here.