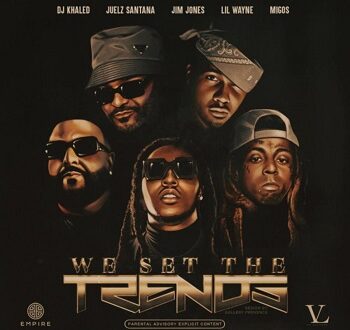 The video for the remixed version of the track “We Set The Trends” is out now.

In this project, Jim Jones connects with some of the best in rap today – DJ Khaled, Migos, Juelz Santana, and Lil Wayne. Khaled, who has unique and powerful energy, sets the beginning of the video. After he opened, Wayne follows, rapping about the trends he set these days and that most of them belong to him. After Wayne’s part, Juelz gets into the track, and then he is backed by Migos.

Not only the crew of artists behind this video is impressive. It is directed by a very powerful team of people as well – Jones, Shila The Don, Will C and Denity.

The original verse of the track lands in the project: “Gangsta Grillz: We Set The Trends” which was released by Jones at the beginning of the year. In the original version, Jones uses the help of DJ Drama. Now the remix is also available from the last week.

You can watch the official video of the remix “We Set The Trends” below via YouTube or on Jim Jones’ official YouTube channel.

[Intro: DJ Khaled] This the remix
And it’s three milli on the wrist
Real life (Another one)
You know we inspired you
We set trends
(Bordeaux & Non Native)
We set for life
We the biggest
Share