The tour includes 65 stops in North America and Europe and will feature performances by Baby Keem and Tanna Leone.

After unveiling his long-awaited fifth studio album, Mr. Morale & The Big Steppers, on Friday (May 13), rap star Kendrick Lamar has announced The Big Steppers Tour, on which the Compton rapper will include stops in North America, the UK, and Europe.

The tour, his first since hitting the road following the release of his 2017 album DAMN., will include performances by pgLang artists Baby Keem, who will support Lamar the entire tour, and Tanna Leone, who will join Lamar and Keem on select stops. With 65 separate show dates, The Big Steppers Tour is Lamar’s biggest yet and will kick off on July 19 with a stop in Oklahoma City and runs through Dec. 16, with the final show being held in Auckland, New Zealand.

Tickets for U.S. dates on the tour will be made available via an exclusive Cash App presale on May 19 at 10 a.m. local time. General tickets go on sale on May 20 at 12 p.m. local time via the Oklama site.

See the official flyer for The Big Steppers Tour and a full list of 2022 dates below. 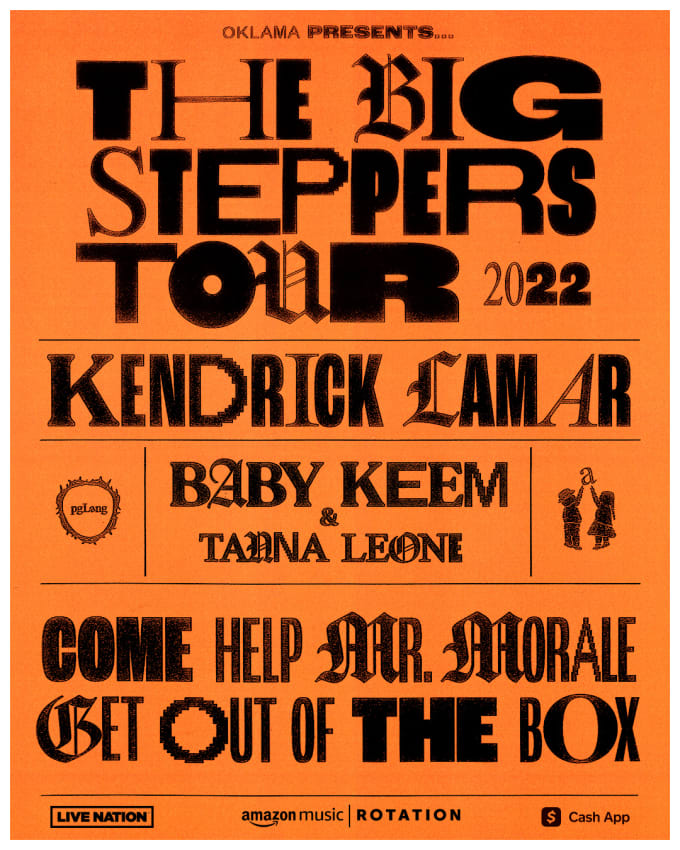 Previous NBA YoungBoy Drops “See Me Now,” & Shares Music Video Shot On iPhone
Next Review Of “Between The Lust”, A Song From Keelah Tay.