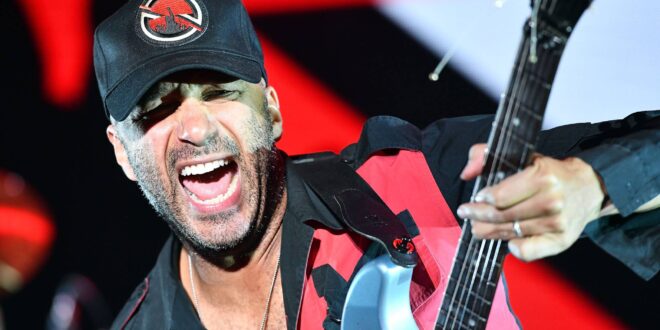 Tom Morello was tackled by security on stage during a recent Rage Against the Machine show.

Rage Against the Machine’s guitarist Tom Morello was tackled by security during the band’s performance in Toronto on Saturday night. While chasing a fan who rushed the stage, the security guard crashed into Morello during the song, “Killing in the Name.”

After being helped to his feet, Morello returned to his post and the band continued performing.

Rage Against The Machine’s long-awaited reunion tour has had a tumultuous start. The tour was originally scheduled for 2020, but was postponed due to the coronavirus pandemic. After finally starting up earlier this year, de la Rocha injured his leg at a show in Chicago and had to finish the concert while sitting down.

There have also been many highlights during the tour. At a recent gig in Wisconsin, the group displayed messages in protest of the Supreme Court and raised $475,000 for reproductive rights organizations in Wisconsin and Illinois.

The reunion tour began earlier this month and is scheduled to run through next April, with a break from September to February.

Check out a video of Morello being tackled by security at Rage’s recent Toronto show below.

Previous Xzibit Is Lying About His Finances, Has Millions Hidden In Vaults Claims Estranged Wife
Next Review Of Amie Jay’s “Cancer Sun” Ep