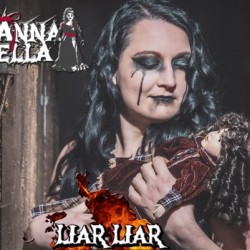 Influenced by women-strong bands such as The Pretty Reckless, Halestorm, Dorothy, and Evanescence, AnnaBella is a Vienna-based Austria musical duet made up of the vintage doll Anna and the singer Bella, whose songs are written down with red ink during late-night sessions when everyone else is sleeping. This is when Anna works her magic. With several tracks out, the pair unites to establish a sound that belongs on the big stage: loud, energetic, and loaded with personality. Released on December 29th last year, “Liar, Liar” is their current song and it’s a single off their upcoming EP titled “4-Bitten Fruit”.

Starting with incredibly trippy melodies with incredible tone loops before we get to hear Bella’s charming vocals, the beats, while modest, seem to propel the groove ahead along with the thrilling and distorting guitars and the hypnotizing pounding that glitter. The luscious harmonics, along with the flavorful vocals, swell with a pleasant sentiment, feeding and fueling our hearts with a cheerful and vibrant resonance that will have us singing forward. I find the song specifically amusing because the acoustics are so vibrant all through the track, driving the melody beautifully.

“Liar, Liar,” which the band recommends as a New Year’s resolution, is a song with realistic lyrics about the lies that bring about the ups and downs of love. It is a song that urges guys to be sincere in their engagements. Even if they can’t, they should do so in a dignified way so as not to offend their lovers. “Liar, Liar,” which was inspired by a genuine story, is filled with passion, as one can hear Bella’s wrath and candor in her performance as she communicates flawlessly. Aside, from its theme, there’s an accompanying video of the single in which Bella is seen fiercely scolding her partner for cheating near a fire. This is because the lyrics to the song were influenced by the movie, “Firestarter.”

“Liar, Liar” is pleasing to the ear, and it would sound awesome in a crowd. The melody is enthralling, and it will completely submerge us in a magical universe. The message is tremendously applicable, and listeners will almost likely drive around town with their roofs down, recovering power from anyone who has ever wronged them. Particularly the ladies. Overall, the song has a well-crafted beat, and Bella’s layered vocals contribute to the overall vibe. I’m certain that the song’s theme will be able to reach a wider crowd.

Listen to “Liar, Liar” by AnnaBella on Spotify, watch the video above link and let us know your thoughts.