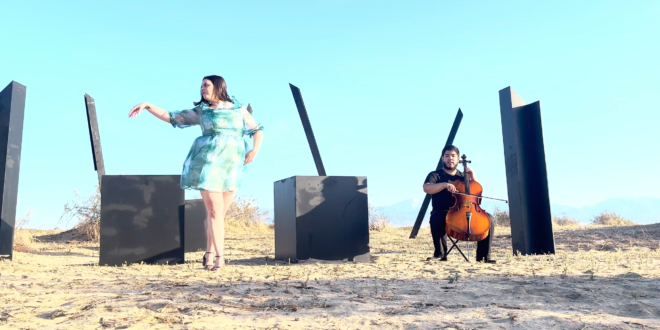 Maria Weissman is a great vocalist from Los Angeles whose musical experience oozes through her recordings, making each of her compositions an amazing treat. And, with her magnificent soundscapes and distinct artistry, she has returned with “Fragments,” the third and final leg of her music video triptych from her EP, “Bad.” On November 18th, the music video for “Fragments,” which deals with trauma just as the other two videos (“Kill a Ghost,” and “Cool Girl”), was released.

“Fragments” is the first song on the “Bad” EP, and it stands out immediately away. It begins with a catchy melody and a small chorus for flair, that fully defines Maria’s sound approach which is creamy and consistent. The concentrated piano melodies and strings, together with the musical elements, contribute to the song’s strong tone, and I was in amazement at how sumptuous and beautifully crafted the song felt although the incredible voice of Maria Weissman breathes life into the song and fills the mind with many fascinating notions.

Weissman explains, “Although ‘Fragments’ begins back in the desert, in the same white dress,
in a familiar scene, there are new changes that portray potential growth. New desert scenes are
introduced, along with two new, colorful outfits. The scene with the cellist is the first with another
person. Perhaps others are being let in. A new, dreamy fantasy sequence unfurls; far from the
desert, the protagonist is now wearing her turquoise and yellow dresses in a blooming garden
and a sumptuous castle.

With significant sentiments of appeal, charisma, and beauty, the lyrics “Fragment” generate powerful sensations depicting regeneration, through both the element of water and the vivid colors.

At the end of “Fragments,” viewers reach a place of closure and even humor along with the
protagonist. Weissman explains, “the ending of Part 3 mirrors the ending of Part 1: “Kill a
Ghost,” as the protagonist again is purposefully walking in the same white dress. There is a key
difference though, as she’s no longer striding away. This time, she is walking toward the
camera, comfortable with the past, confident about the future, and with a bit of silliness and
humor to make the journey less weary.”

Overall, “Fragments” is such a  fascinating journey. The excellent songwriting drags us into its depths and eventually lures us into its moods. The profundity of the song physically creates the accompanying visual and makes it more delightful, as does the music. Likewise, I like the development and the soothing vocal harmonies, which are quite appealing to music lovers like myself. “Fragments” is a lovely piece that sounds satisfying to the ears. It was presented in such a clear manner while still possessing interesting melodic dynamics.

Listen to “Fragments” by Maria Weissman on Spotify and watch the video with the above link and let us know your thoughts. Cheers!

You can follow Maria Weissman here for more information.