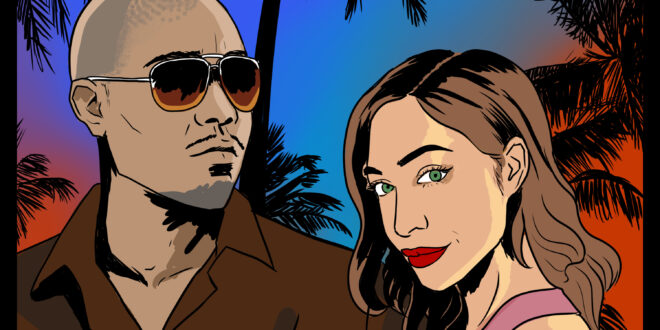 Candyfromstrangers, comprised of Trew and Danni Holland, is a Virginia-based band with a distinct approach and a group that creates music that flawlessly integrates a wide range of sounds. They’re a wonderful band whose abilities have been impacted by artists like Daft Punk, Justice, Sight Telma Club, N.E.R.D., and Mr. Hudson, making their works much more fascinating. After releasing a couple of tracks, the band returned with “Gameshow,” a tune that is both beautifully written and sung. This song was published on October 28th and appears to be quite trendy and fresh.

Beginning with a gripping melody that perfectly complements the pace, the rhythm of the song drew my attention as soon as Danni Holland’s stunning vocal delivery surfaced. Although it’s simple, it effectively provides the appropriate ambiance in the setting of the song as her magnificent and mellifluous voice deftly traverses the tune. Moreover, Trew’s lyrical prowess is precise and exceptionally dynamic, giving him a flawless flow of the song. The verse transitions are fairly concise, which adds to the song’s appeal. The song has a nostalgic, almost special charm to it.

“Gameshow” is made up of beauty and grace, and loads of passion is a love song conveyed through the abilities of a narration that will captivate you. The lyrics, as we can presumably deduce from the title, are about not ending yourself in a relationship in which you find yourself being played. So you should inquire whether your partner is honestly committed or if they are simply toying around. The artists’ performance sounds genuine, and their concept is eloquently expressed through clear lyrics.

Overall, “Gameshow” is a trendy love song with a genuine vibe that features the expressive and primal sound of R&B and pop music, as well as heartfelt performances by Danni Holland and Trew. The music’s haunting melodies and engrossing layered vocals will undoubtedly draw listeners into the artist’s universe and the tale they convey with the song. The production and instrumentation are merely groovy, resulting in a more enjoyable sound.

Listen to “Gameshow” by Candyfromstrangers on Spotify or SoundCloud and let us know your thoughts. Cheers!