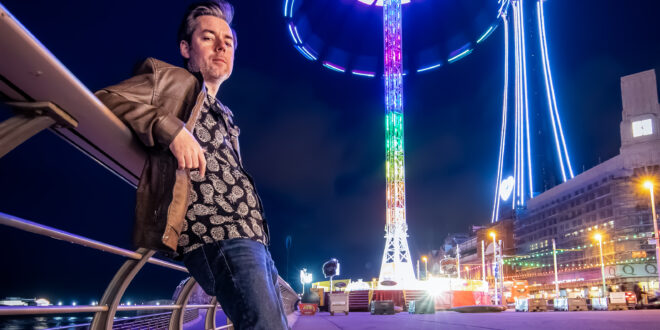 Blackpool-based rising star Rob Lea is the youngest of five children, and his passion for music began at a young age when his music teachers exposed him to instruments and believed in his skill, inspiring Rob to take up the violin, guitar, piano, drums, and even trumpet, for which he became the principal performer in Blackpool Orchestra. Rob builds musical formulae based on his experiences to approach his audience with honesty and lovely voices. On 9th September, Rob Lea released his nostalgic rock and roll-influenced single “Freak” which as a result, leads him into a fresh delight and adds another depth to his multidimensional rock image.

Beginning with a powerful guitar riff, shimmering orchestration, and distorted effects, the music exposes Rob Lea’s instance and ferocious passion while still carrying the sweetness that comes with appreciation. The song’s guitar melodies are masterfully blended with rhythmic drumming that will take the listener off their feet. “Freak” is a short tune, but Rob dazzles us with an irresistible rhythm. His vocals, which have a strong personality and a blazing force, are a crucial feature of the song along with the lively lyrics and elevating, blues-tinged soundboards.

“Freak,” as its concept is characterized by Rob Lea, is a song about celebrating what makes you slightly different from the “Norm.” It’s about sticking your middle finger to everyone who says you are less than perfect.” “Freak” is outstanding, with just the perfect amount of positive energy that is musically engaging and pertinent to the core, and we witness tremendous compassion and genuine expression paired with a flaming composition and creative style that does honor the song.

Overall, “Freak” is an outstanding representation of what Rob Lea is now bringing forth into the scene. The music is professional, with rock elements and lyrics that are upbeat and make you want to party, and has a powerful, captivating rhythm and a good beat that grabs and takes listeners along. Rob’s vocal and instrumental performance quality is consistently outstanding, and he makes the song distinctive and fresh, with considerable commercial potential.

Listen to “Freak” by Rob Lea on Spotify or SoundCloud and let us know your thoughts. Cheers!

You can follow Rob Lea here for more information.