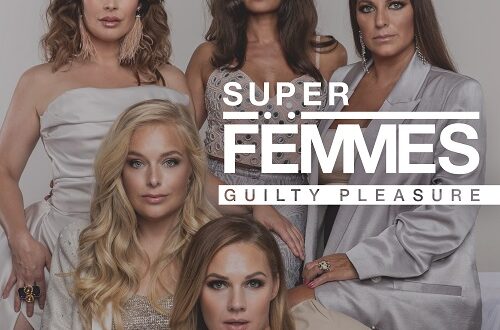 The name Super Femmes is a representation of women banding together, strengthening and empowering one another, all women are superwomen who are stronger together. They play with their roots in the 1990s, inspired by female superheroes such as the Spice Girls and Charlie’s Angels, but with a modern twist. All with a dash of glitz, attitude, and sophistication. They are pleased to have come together, unified in one group, with their diverse origins and influences, and they seek to challenge the limiting perspective of women when it comes to who can make current pop music and why enthusiasm for music has no age, race, or appearance boundaries.

Beginning at the top, the listener is welcomed with gratifying melodies and a lovely funky guitar solo that is both melodic and appealing in its sound and tune. A bit subtle yet intriguing to listen to, which is heightened when the drum beats kick in to build a strong substance. “Guilty Pleasure” captures the song’s nighttime versatility and fun. Because Super Femmes have made sure that the rhythm is paramount and is continually amplified in shifts with their lively vocals.

The music maintains its tremendous atmosphere throughout the second half. The tunes are addicting and will get stuck in your mind right away. The music takes multiple changes during the song, and Super Femmes keep up brilliantly with their soothing yet voices. The hook is also quite appealing and might stay on your head for days. The slightly vintage atmosphere of the performance employed in the music elevates the piece to an unprecedented extent.

With its unique usage of groovy soundscapes, a mixing of varied components, and a distinctive overall sound, “Guilty Pleasure” is full of new concepts. Despite a fair playtime of a little under two and a half minutes, it speeds by and feels over too quickly.

Listen to “Guilty Pleasure” by Super Femmes on Spotify and let us know what you think. Cheers!