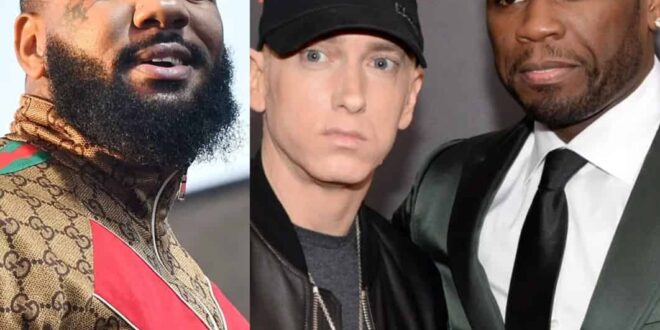 The Game is still trying to get Eminem to go bar-for-bar with him.

Ever since The Game appeared on Drink Champs, he’s made it clear that he’s on a mission to get a response from Eminem. The rapper’s claim that he’s a better MC than the Detroit artist was met with mixed reactions but he’s serious about battling Em in some sort of capacity.

During a recent appearance on Uproxx’s Fresh Pair with Katty Customs and Just Blaze, The Game doubled down on his claims that he’s a better rapper than Eminem. The Game said that hip-hop heads were outraged because “people don’t want you to believe that you’re not better than people.” He went on to explain how Kobe Bryant was frequently compared to Jordan in old interviews but the late Lakers legend would insist that he’s also a one-of-one star on the court.

“When I said what I said about Em, it was to challenge him. To challenge hip-hop. To ignite a rap riot. Not a street fight or not a ‘let’s pull out the straps’ but ‘n***a, get up and rap,'” he said. The Game explained that he did look at Eminem as the greatest rapper of all time but that was because of his history with Interscope and Aftermath.

“At one point in my career, I thought that Em was better than Jay just based off of ‘Renegade’ because The Source magazine said Eminem got Jay on that verse,” he continued, explaining that he’s comparing his skills to Eminem today without regard to their previous accomplishments. “You did it with MGK, why not do it with me?”

“Because 50 can’t rap,” The Game responded, “and so, I gotta go and level up and challenge the better rapper. That’s why. And not to take anything away from what 50’s doing. He could see it and tweet it but he knows I’m gonna respond or he could go rap about it but he’s gonna lose that battle.”

The Game went on to give 50 his “dead flowers” for his success as a television executive but had no faith in his bars. “I’m a rapper. He’s a rapper, and I am the better rapper,” he continued. “When it comes to rap, [50 Cent] can’t out rap me. So, your buddy can rap, though. Nobody really takes shots at Eminem off this preconceived notion that he’s better than everybody. Well, I want action and I want it today. And if you are a rapper or a rap God — the word ‘God,’ we throw it around so loosely but if we really talking about God, God controls everything. So, if you’re a Rap God, control me.”

Check the full clip below.

Next Billboard Music Awards 2022: Kanye West(Ye), Doja Cat, and The Weeknd Earn The Most Nominations.