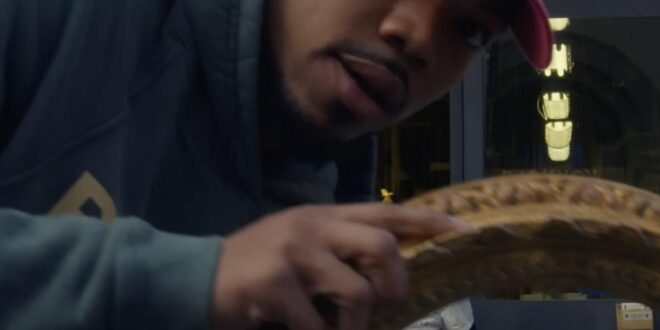 Chance The Rapper Delivers Short Tale “A Bar About A Bar”

Artist Niko Washington helps the Chicago hitmaker in this visual.

The fusion of visual art and music is a partnership that has existed throughout the history of the world, and Chance The Rapper has been displaying his contribution to the conversation. The Chicago rapper previously released “Child Of God,” and in its video, Chance delivers his rhymes as an artist constructs a piece. He has mirrored that visual for his Friday (May 27) release “A Bar About A Bar,” and this time, it arrives with artist Niko Washington.

Chance recently shared a video where the finished artwork was featured at an event that put Washington’s name in the history books.

“Last night we opened the second interdisciplinary piece ‘A Bar About a Bar’ with another private art experience. @nikko.washington became the 2nd black alumni in @artinstitutechi History to have their work shown!!! ‘A Bar About a Bar’ comes out Tn at 11 Chicago time, and is on display till June at The Art Institute of Chicago!!”

Stream the brief “A Bar About a Bar” and let us know what you think.

And the line was so long it wrapped behind the bar
And it exposed moonshine and wine inside the jar
And it kÐµpt goin’ to the alley and the trash bÐµhind the bar
To the same n*gga, he was takin’ a piss behind his car