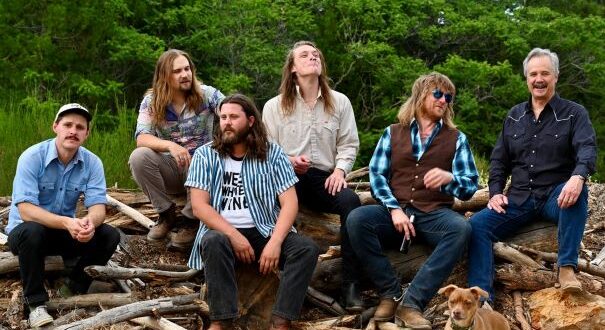 Farrow and the Peach Leaves Goes “All Blue” With New Song

Knibb, Zach Peach (Drums), Leif Bonfils (Bass), Keith Knibb (Guitar), Justin Peach (Guitar), and Hunter Jones (Pedal Steel/Keys) make up the Nevada City-based music ensemble Farrow and the Peach Leaves. They are an eclectic indie band known for their famous blend of Americana, blues, rock, and country. They offered us another country classic, “All Blue,” on September 30th, which is a perfect demonstration of what they can produce. “All Blue” will be on the band’s upcoming album, “Buttermilk Brine,” which will be released on December 9th, 2022.

“All Blue” begins with bluesy guitars riding a lovely country-rock tempo with Knibb’s beautiful vocals. The music is distinct, exciting, and inevitably something to tap along to. The drum pattern keeps the listener’s attention, while the guitars tie everything together with a colorful bluesy flourish. Knibb’s vocals are exciting and have the passion of experience and ability to release with harmonics and soothing passages in equal amounts of goodness.

“All Blue,” a jewel in the band’s catalog, is a song about their hometown of Nevada City, California. The band portrays their city as brimming with magnificence in this song. With tons of ability and ingenuity, the band will undoubtedly take listeners on a journey with this banger, which has a pretty good summary of their city.

The mesmerizing rhythms are somewhat trippy, and Knibb strikes us with his singing, making “All Blue” unquestionably top-tier and deserving of a far larger audience. Leif Bonfilsa’s love of bass lines and Zach Peach’s drumming talents provide fantastic memories for the song, while Justin Peach’s guitar riffs and Hunter Jones’ mastery of the keys give the song what it deserves.

Listen to “All Blue” by Farrow and the Peach Leaves on Spotify, watch with the link below, and let us know your thoughts. Cheers!