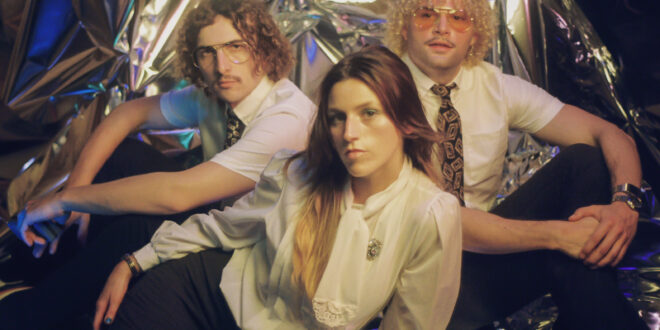 Great Time is a Philadelphia-based band made up of three members called Jill as the band’s vocalist, Donnie on drums/synths, and Zack as the bassist and guitarist, and synths, and they make wonderful music. The group released their song “80z Slo Jam (Live In Philadelphia)” on October 19th, which is the first single from their planned album later this year. Songweb spoke with the trio about their new single and other subjects.

JILL: My name is Jill Ryan and I play in Great Time. There are 3 of us. Donnie- drums/synths, Zack- bass/guitar/synths, and myself on vocals/woodwinds.

JILL: We love all styles but I think some of our biggest collective influences are D’Angelo, Bilal, Little Dragon, Incubus, Aphex Twin, Flying Lotus, Jeff Buckley, Cannonball Adderly, and Patrice Rushen. The list truly goes on and on!

JILL: Zack and I were just talking about this the other day! I am personally so inspired by my creative peers and mentors, by writers and visual artists… by comedy, dance, and silly funny noises I hear alone on a walk around town. I’m inspired by people that live authentically as themselves because it reminds me that I too, can be myself, fully and unapologetically, without feeling the need to fit into the traditional, patriarchal, and capitalist mold that is so pushed upon all of us. Art permits us to be ourselves. It gives us the freedom to express ourselves, connect with others and feel alive and *that* is so inspiring.

ZACK: Regarding trends, I think it’s important to keep up with what’s popular but to stay authentic in how you choose to express yourself. I don’t get much creative satisfaction out of copying what everyone else is doing.

JILL: Our new release is a live album. We recorded our show at Brooklyn Bowl Philadelphia earlier this summer. The entire show was filmed, so videos will be released as well! The first single comes out on October 19th called, ‘80z Slo Jam’ and the full album comes out on December 7th. We’re excited to put out a live album because we perform our songs very differently from the recorded version and for those who haven’t seen us in person, will be a chance to hear what we sound like in life!

JILL: This project is special because we are finally releasing live video/audio from an actual show for the first time since before the pandemic started. We’ve done a lot of in-studio videos but this time, the album will be completely live in front of an audience. We also had two of our dear friends playing with us. Mike Haldeman on guitar and clarinet and Corey Bernhard on keys. The album also features the Philly horn section Snacktime on several of the tracks. Playing music with friends always enhances your life. 10/10 would recommend it.

ZACK: Our live show sounds like the record at times, but the nature of how we produce in the studio means we need to do a certain amount of adapting for the live show, so we usually end up with versions of the songs that sound close enough to the originals, but with their unique spin. It’ll be nice to have these live versions out so people can have a better sense of what to expect when they come to see us in person. Every show is a little bit different.

JILL: I think about this a lot. What am I doing? Who is it for? Why? These queries will always exist and the answers to them will always change as I grow and develop as a person. I think internally as a band, our mission is to create something that sounds good, that feels good, and that is fun to make together. And more externally, our mission is to take that creativity and share it with others to feel a connection. We want to connect with you. We want our sounds to resonate with you.

ZACK: Ultimately, art is completely arbitrary and doesn’t ‘need’ to exist. But as humans, we enjoy experiencing the expression of other humans, much like watching movies or listening to stories. Music can be healing for some, an emotional outlet, or just something fun to put on for entertainment. I’m just happy if somebody listens to our stuff, for whatever reason that might be.

JILL: We do! We love our friendships with other artists and cherish them! We learn a lot from our peers and mentors. We just saw our friends’ band, ‘altopalo’ play in NYC last weekend and it was so energizing! Simply witnessing our peers make music brings us a lot of joy and gets us excited to make new sounds. We’re thankful for our mentors Craig Hendrix, Missy Dabice, and Donn Thompson-Morelli, who have given us advice, guidance, and encouragement throughout our journey so far.

ZACK: It’s easy to lose sight of what it means to be an artist, especially with the way the industry is headed for independent artists. It’s great to have a community that keeps things in perspective while inspiring you to continue.

JILL: This is such a loaded question. Haha! If you like our music, share it with others!

ZACK: feel free to write us a blank check

JILL: We released our debut album in 2018 and some of the feedback we got from critics was ‘they’re still finding their sound’ and they should pick a lane if they want to see any success’ … and our response to that was to ignore it! Haha. Part of what makes us Great Time is our eclectic nature. We are inspired by lots of different artists and genres and we want to make what we wanna make! So to lean into this idea, we released a series of EPs called “Sounds Like ____”. Each EP is grouped by songs that complement one another. The first EP, “Sounds Like ____ [Vol. 1]” includes songs that lean more into RnB and neo-soul. Vol. 2 explores more of our electronic tendencies and Vol. 3 showcases our rock, indie, folk, and post-punk sounds. Songs from each of our releases will be included in the upcoming live album!

JILL: We practice. We take time to rest and recharge. We listen to lots of stuff. We listen to nothing. We talk. We sit in silence. All the things! But practicing does help 🙂

ZACK: You can’t call yourself a musician if you don’t make music. I try to have no ‘zero days’, meaning every day you do at least one tiny thing that relates to music. Usually, it’s more like 10 or 20 things, but for those days when you don’t feel like doing anything, just watch a video or listen to something with intent, or noodle around on an instrument for 5 minutes – it all adds up over time. Motivation is fleeting, but dedication is a skill.

“The original studio recording of this song uses a lot of industrial sounds and has a bit of a robotic feel which I love, but playing it live allows us to explore different timbres and soundscapes which bring out more of a raw and natural yet intense feeling. I want listeners to blast this new live version of ‘80z Slo Jam’ as a form of cathartic release from everyday vexations like your shitty day job or an annoying roommate. Time to let it all out!” – Jill Ryan

Generally, the band has done an excellent job with this song, and Jill’s vocals make listening to the song smoother, which is aesthetically exciting. The instrumentation is excellent and rich, and they are heading in the right direction.

Listen to “80z Slo Jam (Live In Philadelphia)” by Great Time on Spotify or SoundCloud and let us know your thoughts. Cheers!

You can follow Great Time here for more information.