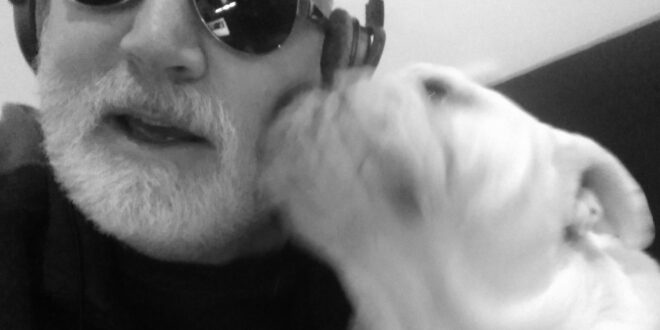 cruncci is a Colombia-based composer, producer, and chief bottle washer who began his career in the Seattle, Washington grunge scene as the wild-eyed frontman of a heavy metal band. Influenced by blues-based bands from the 1960s, seventies stadium rock, EDM, and experimental music, cruncci released his ep on September 13th and I was immediately captivated by his cinematic productions. I had to catch up with him to ask about his inspiration behind the new 4-track instrumental set.

SONGWEB: Tell us about yourself and how your work as an artist is influenced.

CRUNCCI: Well, first the mundane, I was born in San Francisco, the child of hippies. I spent most of my life on the West Coast, landing in the Puget Sound area by the time I was ten. My mom sacrificed her career to raise four of us boys. My birth dad was a librarian before retiring, he and my mom divorced when I was 6 months old. My mom’s second husband was an engineer. He’s since passed away following a lengthy battle with Parkinson’s. All three of my parents had a profound influence on me, each in their way. I am married, and I have 3 kids, two of whom are grown up now and doing their own thing. As a youth I was an anti-social bookworm, I spent most of my time reading at the library while the other kids were enjoying recess. After twenty years in the aerospace industry, I walked away because it was killing me. That was four years ago. I had a horrible weight problem, I was indulging far too much, and if I’m honest, I wasn’t living a life I could be proud of. About that time though, I met my wife, Jenny, and things took a turn for the better. I left the Seattle area and moved to South America, to Colombia where she is from. We’ve been here together ever since. This place is amazing, beautiful, and complicated.

CRUNCCI: first started filling my ear when I was about ten, with a stack of rock n roll records I found in my dad’s study. It was recordings by The Beatles and The Rolling Stones. From there I got very active listening to other rock n roll acts such as The Kinks, and The Who, and then gradually evolved into hard rock and heavy metal, bands like ACDC, Black Sabbath, Judas Priest, and Iron Maiden. This was the eighties though, and I was a sensitive kid so I began gravitating toward new wave bands like Duran Duran, The Police, Bryan Ferry, heavier stuff even, like The Butthole Surfers, Ministry, and relatively obscure music, like Bongwater, and The Cramps. Then came my own time in the limelight. It was 1986 in Olympia, WA. I was a student at Evergreen State College. I hated university, I don’t think I attended more than a handful of classes. But somehow I got recruited into singing vocals for a grunge band, and I discovered acts like Nirvana, Soundgarden, and The Screaming Trees – the louder the better. After grunge began subsiding I started to get a bit more into experimental acts, like Brian Eno and Robert Fripp, making a natural progression toward dance music like Digweed and Sasha, really crisp, elegant stuff. At the same time, I got into the hip-hop acts of the nineties, Biggie Smalls, Puffy, and The Beastie Boys.

CRUNCCI: These days I live in the northern Andes, in a small farming town of a few thousand people. I rarely get away from here, In two years I can count on one hand the number of times that I’ve traveled outside my community. Initially, this was due to the pandemic, but also because my wife is a veterinarian and she raises English Bulldogs. We’re currently caring for ten bulldogs, I have one sitting at my feet right now waiting for pats. It’s just really, really difficult to have this big of a commitment and travel much. Where I live plays a huge role in how I see music, and how I think about creativity and art. This is a community where people are really tough, where they haven’t had a chance to see much of the world perhaps, but they’ve developed such amazing talents at living off the land in a creative, admirable way. How they organize their community, is completely different than in the USA. When I go to the hardware store here, for example, I have my choice of two different types of screws to look at, not the virtually endless supply of products aimed at consumers back in The States. Yes, I spend my fair share of time online, and I have access to all the latest memes, and scandals, and of course, that also has a big influence on me. I’m a curious historian by nature, and I have great concern about some of the craziness going on in the world today. Certainly, that does influence me, though not in a negative way, but more in a realistic way.

CRUNCCI: My current project is a four-song EP called Whacc Intentions. It’s all completely electronic, there are no physical musical instruments on it. It’s an EDM homage to all of the genres of music that I love, and there are many. My idea early on was to take sounds in the vein of Digweed, and The Prodigy for example, and combine that with what I remember from my youth. As an example, the tune Whacc Intentions takes the bass hooks from seventies anthem rock and combines that with grunge stylings. Those sounds are then kind of underpinned by this big kick sound. If I had to sum up my work in a few words, it would be about combining heavy, thundering drum sounds with scratchy, detuned, mean guitar chords, all supported by delicate, choral-type chants and piano arpeggios.

CRUNCCI: I started this process two years ago knowing absolutely nothing about composing and producing. It’s given me a certain sense of self-confidence, a leveling up in life if you will. There are times when I look at this skill set, and acknowledge to myself that even if I stopped today (not that I want to or plan to) I’ve still learned a valuable skill that has improved the way I see the world. It’s also made me more patient, and open to success, open to having the kind of life I want.

CRUNCCI: First and foremost, I have to put a smile on my face. I learned early on that producing music and hoping that other people were going to get as much joy out of it as I just isn’t something I could control. What I can control is how I receive my work. Yes, the tunes need to have some connection, some applicability as music. Much as it’d be fun to go off into the wild blue yonder, and create super experimental sounds, that’s not going to fulfill the second purpose of my work which is to create music that provides worth and value to people.

CRUNCCI: I have some one-on-one connections that I’ve made with music makers and DJs through social media. Those connections have been incredibly helpful from a practical standpoint, chatting about plug-ins for mixing, for example. This is important learning that has had a direct impact on my sound. Something as simple as reducing the number of tracks on a tune. Or how to make a kick sound beefier and more full. Or how to introduce harmonics or EQ, or level things properly. I learned early on that one of the rarest benefits is finding people who will give you unvarnished, helpful, actionable feedback, this is one of this industry’s most valuable commodities.

CRUNCCI: Help me reach listeners who will appreciate my style of music. I don’t care so much about the number of followers I have. For me, it’s about the richness of the connection. Help me get in touch with like-minded artists who are looking for collaboration. I want to travel across the planet making music, playing music, and helping people feel connected to my vibe. I want to continue evolving my sound and get more tribal, and more influenced by world sounds. We live on this massive planet, and I know there is so much out there, sounds that I can gain such great influences from.

CRUNCCI: I’ve posted my stuff on various message boards. When I first started, my projects were SUPER busy. As I recall, one of the first tunes I came up with had no beginning or end, just this kind of abrupt, lurching start and stop. It had about 20 different tracks, it was a total mess. There was so much ambient feedback that my listeners were suffering from auditory hallucinations. But I was SO PROUD of it because I’d made it, and exported it out of my hands and into the headspace of other people. The feedback I got was polite, but also real and in listening, and absorbing it, I was able to start honing my sound, making it feel more cohesive. I’ve always tried my best to get feedback, no matter what, even if someone hates it, I’m gonna get useful takes.

CRUNCCI: Believe it or not, I like to walk away from my workstation, and I like to take long breaks. Some people say you should compose and produce constantly, but I don’t agree with that. For me, the time away is as important to my development as the time spent in front of my computer. I also like to network. When I find someone who has more experience than me and is willing to give of themselves, I treat them like they are the most important person in the world, and I absorb as much of their knowledge as I possibly can. I also do my best to pay it forward, so to speak. Real, helpful feedback is an incredibly rare commodity, it’s the hidden gold of artistic expression.

Overall, “whacc intentions” is an Ep that resonates instrumentally with a desire to convey and offer cruncci his time of glory.

Listen to “whacc intentions” by cruncci on with the link below or on SoundCloud and let us know your thoughts. Cheers!