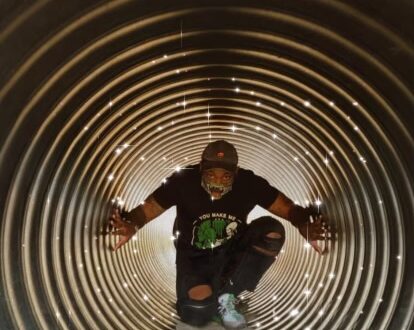 IreQ Savage Knocks Out His Opponent With “1punch”

Ireq, as someone who can create while driving and be inspired by practically anything around him, demonstrates how artistic such a rapper can be. His new single, “1Punch,” was released on July 29, 2022, with the assistance of Areo, a producer whom Ireq met on the internet. Ireq Savage, a hip-hop/rap musician, is unconcerned about what others think of his work; he is only trying to do what he enjoys and fulfill what aches his heart the most on his rhythms for his listeners to appreciate.

He becomes quite aggressive on this astonishing beat that was delivered to him through email and that he knew was the one sort of rhythm he had to smash on this single. He thinks that others will have views (most of which will be unfavorable) on whatever you do as a person, and it is up to you to be selective about who you want to hear or listen to since, at the end of the day, it is just you and yourself.

“1 Punch” is a brilliantly crafted tune that adds a lot more punch to the music. The track is constructed precisely to address the issues that require attention. Ireq has developed this track as one of his most powerful projects by employing sniggering sounds that will undoubtedly melt your mind. His voice is smooth and gem, while the percussion changes smoothly and flows properly all through the piece. His mannequin-like flow is Ireq’s approach to showcasing his work to the world and his listeners who want to do what makes them happy.

Ireq’s artistic identity is influenced by Hip-Hop and other fascinating stuff. He made heavy rap in his bedroom, claiming that art is a confession made through expression.

No matter how good you are, there’s someone out there who is going to hate and that is part of human nature,” says Ireq Savage.

Listen to “1 Punch” by Ireq Savage on Spotify or SoundCloud and let us know what you think. Cheers1!

Previous REVIEW OF CLARE EASDOWN’S “YOUR EYES ARE ICE”
Next Rylai Releases “Issues” (Can you let go of me?)