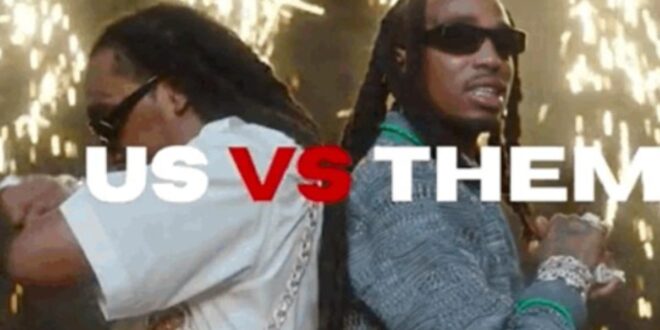 Quavo & Takeoff Are Back With “Us Vs Them” Ft. Gucci Mane

Back in May, the Migos hitmakers delivered their “Hotel Lobby” collab.

Two-thirds of the Migos have returned with another single, further increasing the gossip surrounding the group’s status. Months ago, Takeoff and Quavo emerged with their single “Hotel Lobby” and delivered an accompanying visual that paid homage to Hunter S. Thompson’s Fear and Loathing in Las Vegas. The absence of Offset caused fans to murmur about a possible split, but it was suggested that all was good on the family and professional front for the hitmaking relatives.

However, as the BeyHive buzzes about Beyoncé’s Renaissance, Quavo and Takeoff have returned with a second single, this time with help from Gucci Mane on “Us Vs Them.” A press release teased that an album is on the way, but it is unclear if that will be as a duo or a trio. We’ll keep you tuned in for more about that as information is shared, but for now, stream “Us Vs Them” and let us know your thoughts.

Steppin’ in shoes that’s not your size (N*ggas ain’t steppin’)
The back of the Maybach I sit and recline (Thinkin’ ’bout what?)
And I got Franklins all on my mind, then chrome, then spine (What else?)
Chrome the 9 (Then what?) and bulletproof the ride (Skrrt)

Tags gucci mane quavo takeoff Us Vs Them