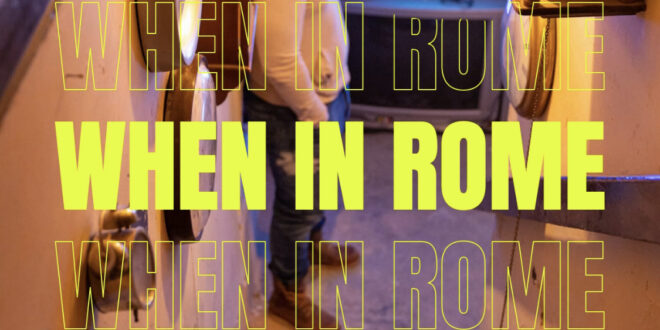 REVIEW OF CHIP PIRRS’ “WHEN IN ROME”

Chip Pirrs, a multi-talented New Yorker, aspires to showcase his artistic skills through writing, performing, and producing. Before beginning to compose music in New York City in 2010, he mostly made wall mash-ups. The musician isn’t quite where he wants to be since he aspires to perform on major stages at festivals such as Coachella and Glastonbury. Chip’s latest song, “When In Rome,” off his EP, “Places I’ve Left Myself,” was premiered on July 30, 2022.

This new single contains a touch of Chip’s particular manner of showing his talent, and you’ll be driven to listen to more of his tracks because of his unusually distinct pop style. Even if he is not the only musician who appreciates pop music, Chip Pirrs’ music shows that he is a one-of-a-kind individual. You’re curious about how he’s able to merge these unique beats and how nicely his voice fits with the gorgeous beat.

“When In Rome” is a song about returning home from a party or vacation with your pals and attempting to explain to your lover what you want them to believe happened. And not always doing a good job of it. This song has amusing lyrics and a lot of energy that keeps your feet tapping. You’re having a great time, even though you can’t keep up with the beat with the singer’s clear voice. If nothing more, the listener will undoubtedly sing the lyric “I was in Rome doing what the Romans do” like a teenager who has recently found Chip Pirr.

Chip claims that Radiohead has influenced him on his musical journey, but as you dig deeper, you can perceive the effect of other musicians such as Prince, Nine Inch Nails, Underworld, and The Dream on him and his work.

When you listen to “When in Rome,” you’ll notice straight away that Chips’ style is one-of-a-kind in a million ways. If you have his complete album in your music library, you will not want to skip any of his tracks. Even AFX Radio London has admitted that he is not an ordinary artist.

Listen to “When In Rome” by Chip Pirr on Spotify and SoundCloud and let us know what you think. Cheers!

Previous REVIEW OF MACKENZIE F. GRAY’S “WHERE ARE YOU?”
Next Review Of Mark Winters’ “Heartbeat”