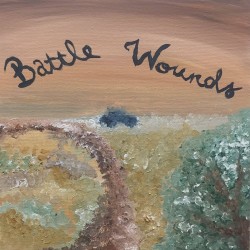 Podge Lane, from Cork City, Ireland, is a folk and alt-country singer with a distinct authorial voice that breathes charm into his performances by combining honest lyricism with exploratory instrumentation. Podge began to independently create music with debut tracks such as “The Dark” and “Move On,” and we now have a new gripping tune from him named “Battle Wounds.” He released this work on September 14th of this year, and it’s amazing.

“Battle Wounds,” which begins with a bluesy tune, is a sprightly song with a lot of elegance with its distinct soundscapes and whimsical guitar, infusing a heartfelt mood into the music and the atmosphere enclosing its consumers. Podge Lane’s vocals convey emotional words over buoyant and lively accompaniment that matches the song’s ethos. “Battle Wounds” has a strong beat and appealing melodies, and the tones employed in the production keep the song fresh, extraordinary, and enticing.

The song endowed with unique and catchy melodies, modest accompaniment, magnetic energy, and filled with a scorching personality, is thematically about the act of sharing and wonders if it’s truly worthwhile. Below is what Lane shares about the song.

“It’s a song about those millions of times you’ve sat somewhere and someone empties every thought they’re having without asking anything about you. It’s poking fun at the idea that someone is “always there for you” when they never really are. And the fact that at any moment you could be doing that exact same thing to someone else.”

All in all, I enjoyed studying “Battle Wounds.” The vocal production components, in particular, set the tone for the song. The sound of the guitars and gentle hitting percussion, combined with exquisite melodies, is highly alive, allowing us to feel the enormous effect of the rhythm. From start to finish, the song is lovely, and Podge Lane’s performance brings out the passion of the music with elements that accentuate the intensity there in the composition. He does a brilliant job with this gem, and it makes me long for what he has in store for us in “Common Country Misconceptions”

Listen to “Battle Wounds” by Podge Lane on Spotify or SoundCloud and let us know your thoughts. Cheers!

You can follow Podge Lane here for more information.