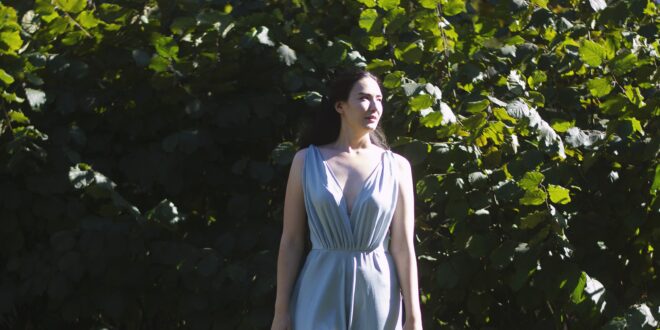 Realma, a rising artist from Bor in Serbia, clings to us with her wonderful new song’s delicacy and warmth. The track, titled “Ashgrey Butterfly,” is the third single from the Serbian/Chinese artist whose writing is filled with passion, with a vocal delivery that will take us all into the realm of her emotions. “Ashgrey Butterfly,” which was released on November 11th this year, recalls a bright fairyland, being symbolically dedicated to nonconformity and all misfits like Realma herself. There are several versions of the song.

Starting softly with a bewitchingly dreamlike and airy sound that unfolds and swells in us and keeps us musically riveted, “Ashgrey Butterfly” fully offers a wonderful and nostalgic feel of a hallucinogenic dynamism and I adore it. Realma’s aural design gives the song a visual dimension and helps you to imagine what she is saying. The lyrics are intelligible, and I’m charmed by the use of the nice dreamlike sounds underneath the warm arpeggios that wonderfully facilitate her vocals. Listening to “Ashgrey Butterfly” is refreshing because it captures our interest and mesmerizes our ears with such amazing charming tones.

Realma, describes the song below:

“It’s an interesting song, since it emanates a kind of Disney vibe, especially in my instrumentation and singing style, yet there is also a bit of that teen-witchy 90s Charmed aura. Some might even recognize the single’s grandiose touches as a nod to Enya. Fundamentally though, the lyrics depict a very personal, endlessly uncertain struggle on how to find one’s place when always feeling out of place. Perhaps the metaphorical juxtaposition between the ashen butterfly and color-obsessed bees found here is somewhat Dickinson-esque. In the sense that the poet utilized similar nature motifs with tones of melancholy in her ever-questioning poetic space of solitude.”

Overall, the song’s layers of simplicity and clarity in the production bring out the greatest feelings, with the compact and firm beat adding to the pleasure. It easily transitions between portions, which improves the listening experience. Realma executed her performance with such passion that it enhanced the affective aspect that seems apparent in the music. “Ashgrey Butterfly” is a gorgeous work, and I am confident that it will be the perfect soundtrack for a magnificent Disney film.

Listen to “Ashgrey Butterfly” by Realma on Spotify or SoundCloud and let us know your thoughts. Cheers!

Previous Review Of Dioneesus’s “Lolita”
Next Eric Cohen Concludes His Prayer Topic With A Shout Of “A.M.E.N”