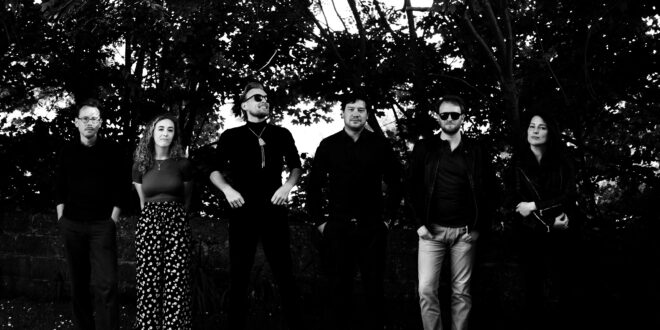 Since its establishment in 2011, The Art Crimes Band, which features Gary Baus on alto saxophone, Stephen Kirby on guitars, Niall Dennehy on drums and percussion, Grace McMahon on vocals, Tim O’Leary on bass, and Katie O’Donnell on piano and keyboards, has been recognized for sounds steeped in R&B, soul, and smooth pop jazz with their nostalgic vibes and outstanding virtuosity that has been hailed by both contemporaries and enthusiasts. They are still releasing fantastic music, and on August 26th of this year, they released a song called “Neon Skyline.”

The song begins with a stunning effect-laden electric guitar riff that sets the stage for Grace McMahon’s vocal stylings. The lyrics are really heartwarming, and her delivery fits the ballad-like character of the instrumental, which transports us on a thrilling journey with delicacy and glamour. “Neon Skyline” is the type of song that pulls all of our emotions to the forefront while also overpowering us with voices and sensuous melodies that keep us immersed in the music with the vocal tone and song’s tune complementing the storyline which is really fascinating.

“Neon Skyline,” a song with lyrics based on the novel “Bright Lights, Big City” by American author Jay McInerney, was created by guitarist Stephen Kirby during a nighttime drive from Los Angeles to Las Vegas as the lights loomed over the horizon from the highway. The novel tells the story of a character who gets caught up in the mid-1980s New York City fast lane and how they manage to escape it. I’m reminded of musicians like Bon Iver, Bruce Springsteen, Tom Petty & The HeartBreakers, John Mayer, and Tom Petty & The Heartbreakers by the way the band plays with our senses by gradually adding ingredients to the song.

Overall, the band’s performance comes off as earnest, with simple, flowing melodies that heighten the lyrics’ theme. “Neon Skyline” is a fantastic example of what The Art Crimes Band is now contributing to the scene, as they provide us with lovely, soulful music that we will undoubtedly appreciate.

Listen to “Neon Skyline” by The Art Crimes Band on Spotify or SoundCloud and watch the video with the provided link and let us know your thoughts. Cheers!

You can follow The Art Crimes Band here for more information.

Previous SR Wes Wanna “Get It For The Low” On New Single
Next Review Of Blake Cateris’ “Days, Weeks, Months & Years”