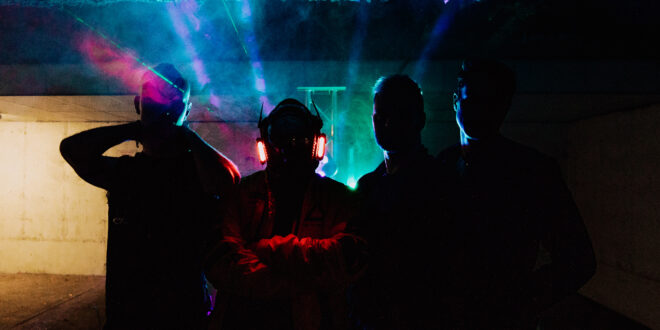 Review Of The Starkillers’ “Here With You”

Based in Salt Lake City, The Starkillers are a modern pop/rock music band created in 2020 by Jon Omen, Chris Panic, Doc Taylor, and Mike Fiedel to make amazing music. They are a powerful four-piece band that creates fantastic soundscapes and tones to provide a wholly unique musical perspective and are influenced artistically by The Killers, Foster The People, Walk the Moon, and Foo Fighters, as well as aesthetically by Cyberpunk 2077, Star Wars, Blade Runner, Altered Carbon, and others. They added “Here With You” to their catalog on December 16th, and while it’s their first project that I’ve heard, it instills nostalgia in the best ways, which speaks well of the band’s artistry. I think I have a new artist in my lineup.

Opening intoxicatingly with mild and eerie acoustic guitar riffs played by Mike Fiede to create that compelling mood, “Here With You” is a delicate and lush song with an angelic touch from its onset. And soon after, Jon Omen, the band’s lead vocalist, enters with lovely and nourishing vocals that wonderfully complement the sweetness of the music. And, having a gift for expressiveness, he doesn’t hinder in his lyrics, instead depicts a strong urge and certainty in his delivery. Moreover, the elegance of the music is heightened by the cheerful cadence and the rich melodies which also adds to the attractiveness. Just after the second verse, Chris Panic shows off his bass skills, while Doc Taylor shows off his drumming prowess.

“Here With You” is the kind of song that could be delivered to that special someone you’ve waited your whole life to be with since the lyrics are so relevant. It’s a perfect love ballad, and Jon Omen conveys his emotions beautifully. With this song, I believe he has a message to impart as he smirks his vocals with passion. Lyrically, this is a song about yearning to be with a person you love and care about and not wanting to leave their side because it feels natural to be with them. It’s just a love and affection song. It’s a love and affection song with introspective lyrics that are thrilling and dear to the heart.

Curated with absolutely stunning vocals, an incredibly calming pace, and amazing beats with such a trendy flavor, “Here With You” is a song I would listen to on a regular schedule. It’s just contagious. It’s a lovely tune with a well-structured accompaniment with motions that engulf us in music. Overall, “Here With Me” by The StarKillers is a tremendously appealing song with a seamless flow and a beguiling air.

Listen to “Here With You” by The StarKillers on Spotify and let us know your thoughts. Cheers!

You can follow The Starkillers here for more information.

Tags Here With You The Starkillers

Previous Review Of Luke Frees’ “If There Ain’t A Heaven”
Next Zoplo Releases A Moving New Single, “Are we there yet”