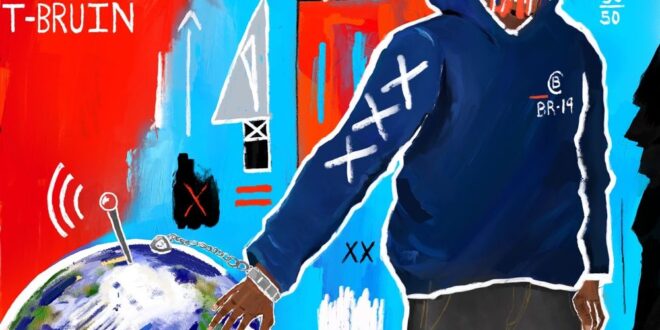 T-Bruin Sets In With “Stuck On Earth” Ep

T-Bruin is a rapper from New York City, New York. He began releasing songs in 2016 and has released a couple of albums and Eps as well as singles and credits Jay-Z, Lupe Fiasco, Nas, Drake, and Kanye West as influences. His work surely expresses itself in terms of how skilled he is. T-Bruin may captivate the hearts and ears of over 250 individuals monthly.

His most recent release “Stuck On Earth” is a four-track EP that clocks in at approximately 13 minutes. The EP begins with “Sun Gazing,” a track that plays with itself. It’s one of those songs that takes you back to the days of old-school rap. T-Bruin, on the other hand, keeps things light and funky with soulful samples and fluid flows. His voice is very stunning and contributes to the song’s delicate textures. Melodically, “Sun Gazing” is a pleasant and simple tune to rhyme to.

“My Universe” differs from the first track in that it slows down a few notches. This song, in my opinion, demonstrates T- Bruin’s versatility. His voice is so powerful that it’s impossible not to admire it. It’s the kind of tune that gets you thinking about everything and everything. In the middle of the song, he flips the record on its head with a pitch-perfect beat swap. The countermelodies on this track are intuitive and add a lot to the overall composition.

“Tug Of War,” another wonderful track featuring Xiolynn, is a great complement to the “Stuck On Earth” EP. This wonderful feature adds to the mellowness of the song’s rendition. This is the type of tune that would most likely get a listener thinking. Xiolynn opens with emotionally charged vocals. This single strike the spot, and T-Bruin and guest artist Xiolynn do an excellent job with both the words and the delivery.

“10,000 Hours” provides a sharp contrast to “Tug Of War.” It adds another level to T-Bruin’s versatility. The song feels the most personal of the group, an extraordinarily honest and raw outpouring of T-Bruin’s personal life. T-Bruin lightens the tone by rapping about pushing oneself to the limit to achieve a talent because mastery requires “10,000 Hours” of hard practice.