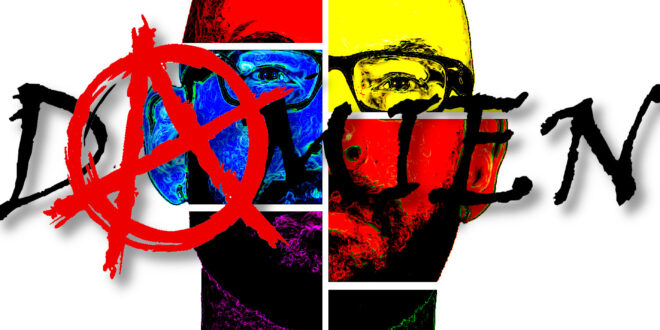 Damien is a queer, non-binary artist who uses emotional, post-punk political commentary and summons to social activity to challenge popular conventions. He debuted in early 2020, and his music combines electro-rock with elements of pop and industrial, as well as lyrical material that has confirmed him as an artist hell-bent on generating a commotion that breaks the conventions of postmodernity.

Damien has played in front of sold-out crowds, and in May 2021, he released his record in front of a near-capacity crowd at Brisbane’s historic Lefty’s Music Hall, winning critical accolades for his enthusiasm and crowd involvement. Damien released his second studio album, titled “Wrong Age. Wrong Race . Wrong Gender” which is the follow-up album to last year’s “Girl.” This album has a total run time of 28minutes and 6 seconds and comes with beautiful singles. Damien elaborates The album title is a critique of how civilizations have frequently given individuals preference based on factors beyond their control, such as color, age, and gender. There has always been an idealized group based on race or age and a disliked group throughout history.

Starting with the first song “2 Out Of 10,” the album’s most pop-influenced piece, it draws inspiration from The Strokes and The Dandy Warhols. With programmed beats, snappy synthesizers, and Damien’s unusual voice, the song is a self-deprecating anthem that makes a parody of the way we assess ourselves and others based on looks, and laughs at the steps we take to seek the affirmation of others. A complete dance tune that struts with all the delusory confidence of someone attempting to conform in the hopes of being noticed. It’s the ideal prelude to what’s to follow.

“Body” is a possible thematic outlier on the album. “Body” is influenced by Depeche Mode and explores the many degrees of desire and closeness that come with partnerships. “Body” features acoustic guitars, a drum machine, and synthesizers are included. “Body” is Damien’s most accessible music, and it will appeal to a wide range of listeners.

Human, the fifth song, is an industrial rock-influenced song that conflates good energy rhythms and noises with lyrics that beg us to explore our humanity and the vulnerability and connection it provides. It’s the track that, for Damien, best encapsulates the aim of this album and a return to understanding and sympathy mutual.

“Love Myself” is the album’s second-to-last track and the album’s first single. It is a consciousness made by someone who is developing to respect oneself in isolation from others and build an identity that is not dependent on existing in an emotional bond. “Love Myself” is really about being comfortable in your skin rather than dependent on another person and their regard.

“Dreamer,” the album’s final track, serves as a good denouement. The song returns the album to its conceptual origins, retreating to a point of self-doubt and fear that all that I am and desire to be will eventually be of no importance. It has more vulnerability and uncertainty than the preceding tracks, which were all about self-discovery, but it appears that despite those findings, Damien is still struggling with his fears.

Listen To “Wrong Age. Wrong Race. Wrong Gender” by Damien on Spotify and let us know what you think. Cheers!