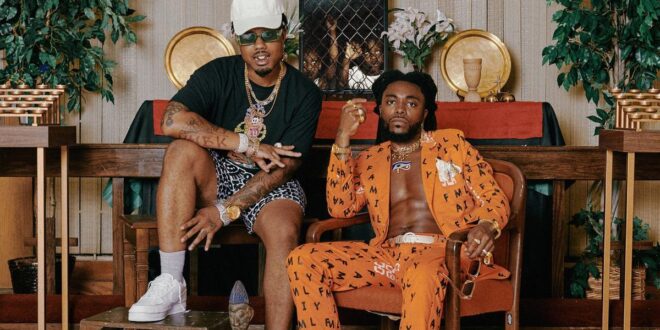 EarthGang tap Smino for a new track on the deluxe version of “GHETTO GODS.”

EarthGang started this year right with their latest album GHETTO GODS, a 17-song project with huge features from Ari Lennox, CeeLo Green, Nick Cannon, Future, J. Cole, and more. When they announced they were going to add to the project with a deluxe version containing six more songs, fans were understandably excited.

The deluxe version was dropped on Friday, July 1, and boasts even more big names, including Wiz Khalifa and Blxckie. On one of the new songs, “AMBEYONCÉ,” the duo is joined by Smino to talk some big talk. The song finds them comparing themselves to none other than Queen Bey– “Keep the ambiance around me, I’m Beyoncé,” sings Johnny Venus on the chorus. The instrumental backing of the crew is fitting for the summer, comprising a flamenco guitar and wobbling beat. Smino’s verse matches the playfulness of the track, pulling out references to Avatar and Cars and talking about eating bowls of yogurt.

Check out the song below, and let us know what you think of it in the comments.

Check your story everyday, but don’t want you to know
Can I hide it? Can I keep it on the tuba, low
Made my bed, hammer, nails, hard as Hell, there I dwell
On the count of three, we out, I hope my parachute blow