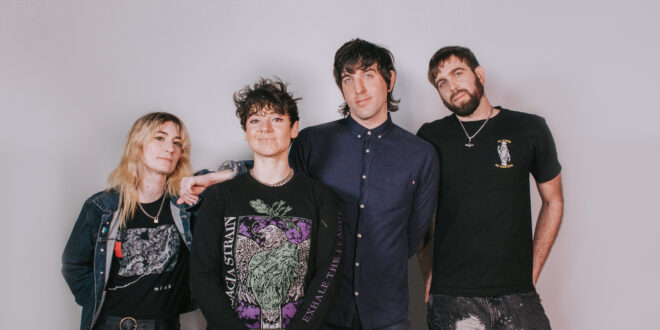 Gloomy June Is Out With Their New Single, “This Party Is A Warzone”

“This Party Is A Warzone,” Gloomy June’s latest song, is an infectiously catchy new piece with an incredible combination of sounds.

Gloomy June is a San Francisco music-based band made up of singer Alexi Rose Belchere, guitarist Devin Nelson, Jack Sundquist as the bassist, and drummer Ash Hyatt. They recently released their glossy vintage pop single “Always Gonna Let You Down,” announced their impending debut EP Popsick, and confirmed their appearance at Fest 20, and San Francisco’s favorite melancholy pop band is only getting started. Gloomy June, on the other hand, released their thumping electro-punk song “This Party Is A Warzone” on May 19th, ahead of “Popsick”, which will be released on June 2nd, and a full Southwest tour in June and July.

“This Party Is A Warzone” was inspired by the desire to party as if your life depended on it, along with the realization that the party cannot endure forever. The statement “Take a photo of this existence before we fade away” alludes to the partygoer’s social media presence and the fleeting nature of the situation.

The whole music is brimming with turbulent energy, from the thrashing guitars to the raucous rock drumming and on to the stinging lyrics, such as “take a snapshot of this existence before we fade away,” which represent the tension both within and outside the band at the time.

The upbeat, chord progression and dance-inducing chorus of Gloomy June further add to the party mood. Finally, the contrast between party excitement and internal strife softens the blow of recent events and positions the band for a promising future.

The group achieves in producing a sound that is evocative of some significant artists in the field of Pop Rock while being new and original at the same time. Gloomy June is an act to keep a keen eye on, and this single is confirmation of that.