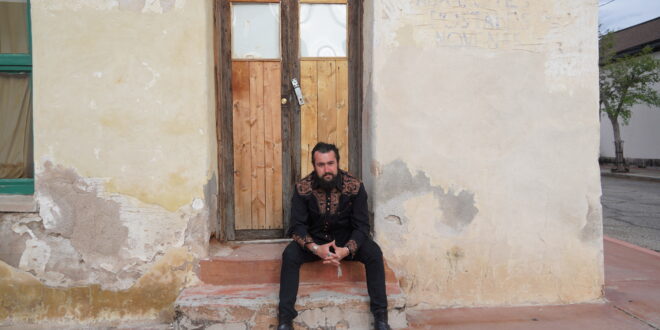 Cancion Franklin, originally from Tucson, Arizona, is a traditional Americana music singer whose musical career began when he first heard The Blues as a child. With such vivid lyrics, his songs leave a lasting effect on me, and I would characterize them as charming, passionate, and sincere. Cancion’s compositions genuinely go to the core of the emotions and are so affectionate that they leave us spellbound, just like he has accomplished with “Blue Jeans,” a song he released this year on November 4th and is very contagious.

“Blue Jeans” commences with a gorgeous piano and acoustic piece that sets the tone before Cancion Franklin’s vocals come in with one of the most fascinating melodic segments in a relaxing and remarkable manner of singing that matches up the song exquisitely. The song is a very relaxing and pleasant tune with an astounding lilt and a strong vocal delivery that lends the song the right attitude to make it seem more appealing making it a profoundly different attribute. Cancion Franklin’s approach to songwriting is brilliant and iconic, as evidenced by this song’s outstanding lyrics and ethereal meaning.

Talking about “Blue Jeans,” Cancion says it’s a song he made about the plans he made, the juke joints they took him to, and every bad turn he’s taken to find a space where he can still be original. But, in my opinion, the lyrics are simply magnificent and convey a more profound message than the music. They are so raw and candid that they hit us dearly in an atmosphere that is positively addicting.

Overall, “Blue Jeans” keeps a steady rhythm and the usage of delicate elements adds a lot of charm to it. Cancion’s soulful delivery also contributes significantly to how we feel about the song, allowing his individuality to show through. The production helps immensely with the overall vibe of the song, and it delivered all that the song deserved. From the beautifully smooth vocal production to the lovely electric and acoustic guitar riffs that glide along.

Listen to “Blue Jeans” by Cancion Franklin on Spotify and let us know your thoughts. Cheers!

You can follow Cancion Franklin here for more information.