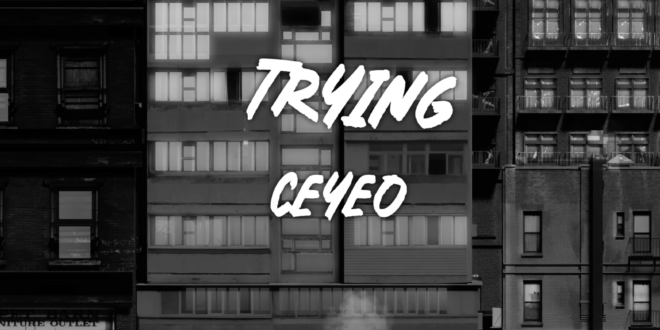 Ceyeo is a Chicago-based independent musician that writes varied, sophisticated, emotionally complex songs that disrupt rock and pop tropes with an approachable alt electronic rock sound. This is a musician who blends electric guitar, bass, drums, and synthesizers with unusual instruments to produce music with an approachable sound.

Ceyeo’s music comes off as innovative and original, which distinguishes her. She accomplishes this not just by merging genres, but also by attempting to keep her audience interested through composition and orchestration. “Trying” blatantly blends pop, hip-hop, R&B vocals, and percussion with a classical string part.

The song grows more melodious as it proceeds, with periods of more personal melodies. Matter of fact, this is usually accompanied by a recurrence of the boisterous stance that Ceyeo appears to excel in.

Lyrically, the song conveys an open and heartfelt account of how difficult life can be at times. Ceyeo adds to the sensitivity of the track’s theme by singing about being unaccepted because of your sexuality or race, which adds even another degree of stress and complication that many individuals must deal with simply because of the way they were born. “Trying” is a song about a loyal friend who is strong enough to provide support regardless of the prejudice and has chosen that being yourself is not a crime and that you and I will always be together.

Ceyeo does not let go and easily captures the listener’s attention with the excellent vocal lines that fall on a successful instrumental, understanding exactly what can be acknowledged from the first notes.

Ceyeo wrote, composed, and produced the song, which included amazing vocals, and it was mixed and mastered by Max Honsinger at Tileyard Studios in London. It was released on May 6th of this year. “Trying” is a well-crafted track that makes me want to hear what Ceyeo has in store for us next.

Listen to “Trying” by Ceyeo on Spotify and let us know what you think. Cheers!