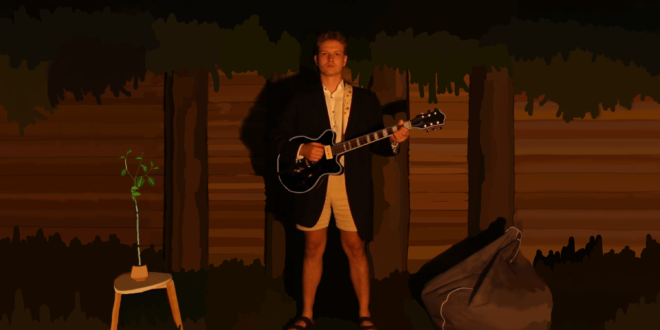 Oliver Birch is a composer, songwriter, and producer living in Auckland. He has published his debut album “Burning Daylight,” which consists of 9 tracks and lasts 31 seconds and 21 seconds, and is about existential agony, the steady destruction of democracy, and loneliness. It spans numerous genres, ranging from new wave to pop. The album was released on August 5, 2022, however, he released a music video for the album’s title track on May 3, 2022.

Oliver Birch introduces himself with the album opener, “Lieutenant Bark.” Which is an art rock odyssey that sets the tone for the entire album artistically and thematically. The title tune “Burning Daylight,” is then followed. It is a more introverted singer-songwriter composition that muses on attempting to make the most of one’s time while facing solitude. The third song, “For You (One of Two),” comes next and is a love letter (and apology) to Birch’s significant other.

Following the fourth song on the album, “Inflection (Interlude),” there is driving, new-wave-Esque music in “Straw Man Dirge” in which  Birch explores excessive disinformation in the digital era as the fifth track. This song is theoretically tied to the sixth song, “Docile Healthier,” which is a sort of modernized follow-up to Radiohead’s “Fitter Happier.”

“Sandpaper,” the album’s seventh tune, comes next. It’s a gritty post-rock song about constantly chasing one’s dreams. It is influenced by both Perfume Genius and Pacific Northwest Emo (and the film Whiplash). The eighth track, “To Be Great,” begins as a Nina Simone-style piano-driven ballad but builds to a final chorus reminiscent of Kate Bush’s The Big Sky. The album concludes with “For Me (Two of Two),” an instrumental composition that follows the same sequence as its predecessor (For You). It encapsulates the album’s essence and is a chance for the artist to achieve his ultimate goal of making music recognized throughout the world.

Per Oliver Birch, “The album combines many styles; namely, experimental/baroque pop, alternative music, new-wave, and singer-songwriter music. If you are interested in artists such as Kate Bush, Perfume Genius, HAIM, David Bowie, or Phoebe Bridgers, I would hope that you might enjoy this album. It is the culmination of hundreds of hours of solo work and is very personal to me, but I write about existential angst, struggling with isolation in recent years, and desperately wanting to be something. I imagine many will find it relatable!”

When it comes to the album, it is intended to loop around this sequencing. It’s similar to how an artist navigates phases of drive and all-consuming want to produce something of himself, while also cycling through periods of nihilism and questioning what the point of it all is. Birch is a disciplined auteur, and each song is meticulously intended to emphasize this theme. There are verbal hints between songs, and some tracks conclude with musical references to others, implying an alternate album chronology.

The album contains a lot of good compositions, which enhances the listening experience. The wonderful vocals on the majority of the tunes perfectly compliment the instrumentals. “Burning Daylight” is without a doubt the most vivid, lively, and diverse record I’ve ever heard.

Listen to the “Burning Daylight” album by Oliver Birch on Spotify and let us know what you think. Cheers!

You can follow Oliver Birch here or below for more information

Previous Review Of Gemïny’s “Hesitation”
Next “All I Do” Is Win, Chase Perez Says In New Song