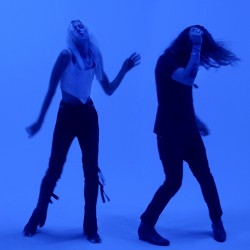 Review Of Songs for Sabotage’s “Shadow”

Songs for Sabotage made up of Lina Sophie and Richey Rose, is a Los Angeles-based band that formed in 2017 at the Brooklyn bar and is noted for crafting songs with lovely rhythmic sections, and groovy and pop elements knitted into exquisite works of art while they sing fluently in their accents and provide spectacular performances, as shown on “Shadows,” their most recent song released on November 11th, which is a Chromatics cover hit. And then, it’s an irresistible tune with amazing production.

Beginning with quiet-loud vintage synthesizers, the highly dynamic, energetic rhythm will have your feet tapping before Lina Sophie’s seductive vocals are featured. It’s stylish and efficient, and it keeps us hooked along with the song’s crisp beats and shimmering bass line. Moreover, the song is rich in melodies and intermingled with certain intricate patterns that soak into our thoughts; everything is constructed with elegance and provides the music with a unique effect, thanks to Richey Rose’s flawless production. “Shadow” perfectly captures the depth of Songs for Sabotage’s musicianship.

When it comes to “Shadow,” Songs For Sabotage notes it was released in part in conjunction with their friends over at Darkness Calling, who released the track exclusively on Halloween as part of their Twin Peaks-themed compilation, Wrapped In Plastic. Not only that but the song was accompanied by a video in which Lina Sophie is shown holding a microphone and performing, with a scene showing her shadow, while Richey Rose is seen playing with his electric guitar in his hand. The video’s location is reminiscent of a misty nightclub with a solemn atmosphere, as the two are shown executing different dance movements.

Overall, “Shadow” is a beautiful blend of melodies, harmonies, and voices that are rich in emotion. Lina Sophie’s vocals are gorgeous and sound fantastic, and they have been blended in a way that enhances the track’s beauty and attractiveness. The production is superb, and only those with an ear for fine music would appreciate it. Because of its rich vintage undertones, it does not feel conventional. “Shadow” is dangerously awesome, and I cannot bear to wait until 2023 for their next album.

Listen to “Shadow” by Songs For Sabotage on Spotify or SoundCloud, watch the video with the above link and let us know your thoughts. Cheers!

You can follow Songs of Sabotage here for more information.