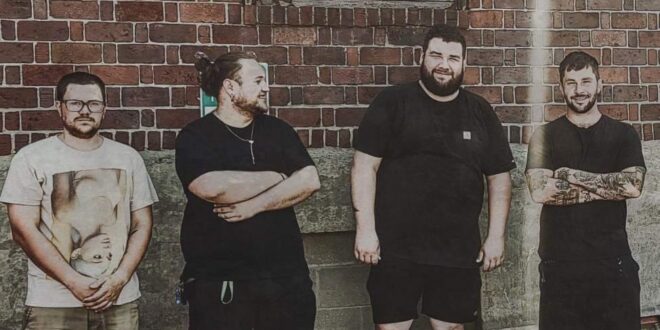 Wolfshirt, a Hardcore and Punk-influenced band, released their four-track namesake extended playlist (EP), “Wolfshirt,” inspired by post-hardcore magic. The band’s nostalgia spread far and wide following the release of this EP, which represents a crucial milestone in their musical journey of doing what they love. The band describes the EP-making process as “wonderful.” As a group of four, they met in Biddeford, Maine, by divine coincidence. Nick Coggins, Brandon Thurlow, Nick Villaci, and Nick Manini make up the band. The EP was published on December 1, 2021, with the assistance of the Legendary John Zebley, who assisted with the recording, and they claim it is about the merging of mind, body, and soul.

“Wake” is the first song on the EP, and I believe the name and the energetic sound it creates warn you to be prepared for the tracks that follow on the “Wolfshirt” EP. The seamless blend of rhythm and voice was flawless. “Wake” catches you off guard with its great blending, transition, and combination or blend of rhythms.

“Dive” is the EP’s second single, and much like the first, the band proves their quality in this piece as well. On “Dive,” they created another fantastic hardcore punky composition. It’s the sort of music that makes you wonder whether the composer has any other songs since it sounds so unique and wonderful.

Wolfshirt’s third song on the “Wolfshirt” EP is “Slice.” This is just as lovely as your favorite soundtrack. When you keep hearing the intense rhythms relentlessly playing to make you go into the moment of your life, it truly seems like bliss.

“Movements” closes the EP, and it starts a little slower than the other three tracks. Nonetheless, it is the ultimate art that fills you with delight. At the beginning of “Movements,” you can hear the amount of peace that this song exudes, and it is just great vibrations, a beautiful piece of art by Wolfshirt. The ambient, airy textures and mood continue in this tune. The beat is as vibrant as ever, and the singer’s vocals are mature.

Each track’s captivating melodies and appealing tunes speak for themselves. Wolfshirt, on the other hand, appears to have taken the “Wolfshirt” Ep to the next level. The mesmerizing beats keep you focused on the songs as the singer’s voice guides you through them. The guitar work is sophisticated and lively, and the synth complements it by generating a pleasant catchy riff. The band’s writing approach is unusual, and their music is a delectable blend of genres.

Listen to the “Wolfshirt” Ep by Wolfshirt on Spotify and let us know what you think. Cheers!