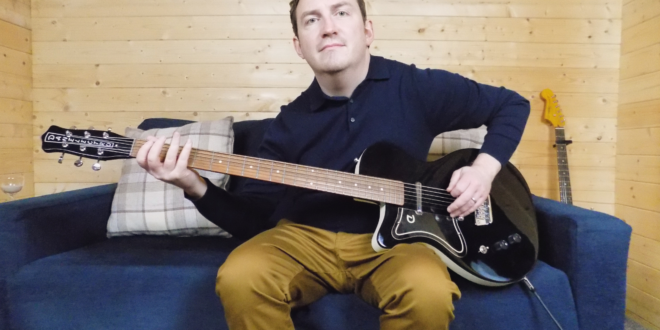 S J Denney is a singer-songwriter from Essex, England. He discovered vinyl versions of The Beatles’ White Album and Neil Young’s Harvest when he was a child and fell in love with music. S J was a choir boy who performed in a variety of locations around his area. His next step was to learn to play the clarinet. While music theory provided a good basis for Denney, he quickly opted to concentrate his efforts on self-learning the acoustic guitar and songwriting. S J has played in several bands, duos, and as a solo performer. These activities have taken him throughout the United Kingdom and the Republic of Ireland.

S J Denney has released several EPs in recent years. Each has witnessed his artistic development, and “4 Reasons To Fly” is no exception. The EP consists of four tracks and lasts 19 minutes and 16 seconds and was published on the 20th of May, 2022. The arrangements in this compilation are rich and keep the listener on their toes. A vast variety of instruments that have never previously appeared in S J’s music are included.

The first track from the EP, “On Any Other Day,” was created in response to the consequences of Covid lockdowns. Denney admits to being an introvert. Despite this, he, like the great majority of people, found the previous several years extremely difficult. The song was created in February 2021 and is about how he would act on his first day of freedom. A horn group and a sweeping harp melody are featured in the tune.

S J’s most recent single, “All I’ve Ever Known,” is the second song on the “4 Reasons To Fly” EP. The song is about self-realization, and it emphasizes the fact that he feels at ease in his skin. The lyrics, on the other hand, address the notion that no one can go through life without someone to weep on. This arrangement is enhanced with harmonica solos and hammered dulcimer.

The first single released from this EP, “And Then You Wonder,” appears as the third tune. It is similar to ‘Eleanor Rigby’ in that it solely involves vocals and strings. Lockdown is the dish of the day once more, with Denney fantasizing about a return to pre-Covid times and worrying about whether the world will ever be the same.

The conclusion tune is “Is This the End?” It begins with a beach guitar melody that soon gives room to a diverse range of instruments such as the duduk, Hammond organ, and oboe. The lyrics recount the story of a deteriorating partnership. Nonetheless, there is an upbeat undertone that propels the piece through.

Listen to S J Denney’s “4 Reasons To Fly” Ep on Spotify and let us know what you think. Cheers!